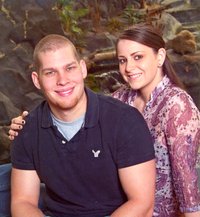 Keith and Melissa Ostermeyer, Tonganoxie, announce the engagement of their daughter, Aimee Ostermeyer, Lansing, to Matthew Mowery, Lansing, son of Brett and Kim Dahmer, Lansing, and Bill Mowery, Lansing.
The future bride is a 2007 Tonganoxie High School graduate and plans to graduate from the University of Saint Mary in 2012.
She is employed as a bartender at Applebee’s in Leavenworth.
The future groom is a 2005 Lansing High School graduate and attended Emporia State University.
He is employed by EARP Distribution of Kansas City, Kan.
The couple plan a July 16, 2011, wedding at the Eldridge Hotel in Lawrence.

Rick and Eva Hershey announce the engagement of their daughter, Lisa Hershey, Basehor, to Justin Bloom, Basehor, son of Julie Halling and Bryan Bloom.
The future bride is a 2008 Basehor-Linwood High School graduate and is studying music with an emphasis in jazz at Kansas City Kansas Community College. The future groom is a 2005 graduate of Free State High School in Lawrence. He is studying computer technology at KCKCC.
The couple plan a July 15 wedding in Leavenworth.
A reception will take place at the Riverfront Community Center in Leavenworth.