With the end of a high school sports season, coaches are faced with the inevitable loss of their most experienced athletes to graduation. 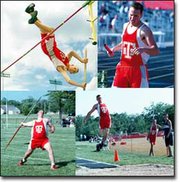 Seniors, from left, Sheldon Trieb, Jacob Hoffhines, Joey Holek and Tony Miller are among the 11 that the boys track team will have to replace next year. The Chieftains lost point-winners from nearly every event, but THS Coach Phil Williams said that he was confident his team would work hard in the off-season to replace departed teammates. Other graduating boys are Kent Clubine, Ryan Hatfield, Aaron Knipp, Rodney Lobb, Matt Needham, Roger Robinson and Jacob Sledd. Aubrey Mikijanis was the only senior on the girls team.

The girls team lost only one senior, Aubrey Mikijanis, and she was out most of the year with a foot injury. All of the team's main point-winners should be back next year, as a strong junior class gains another year of experience, strength and conditioning.

The boys team, however, lost four state qualifiers, seven top field event performers and the cream of the crop in nearly all other areas.

In the field events, the team lost Kent Clubine, Tony Miller and Roger Robinson, its top three shot putters. At least one of those three finished in a podium spot at every meet. Miller qualified the event for state.

The team also lost Aaron Knipp, who finished in the points in the discus several times this season. Miller also earned several top-three medals in the javelin.

Coach Phil Williams said he wasn't sure who would replace those departed throwers. He said it would depend on who was willing to put in the effort.

"We've got several kids with the potential," he said. "It just depends on how much they improve and how hard they work in the off-season."

Williams said that as of the end of the season, sophomore Jacob Walker was the top choice to replace him.

In the field events, the team also lost pole vaulter Sheldon Trieb, who qualified the event for state. But the Chieftains already have strong replacements for him in juniors Karl Cleavenger and Dustin Schultz and freshman Travis Andrews.

"Definitely the vault will be one of our strongest events next season," Williams said.

Another of Tonganoxie's typically strong events, the 4x800-meter relay, has some fast shoes to fill.

Jacob Hoffhines and Matt Needham, both members of that state fourth-place team, are gone, and Williams said he had no idea who would replace them.

Although Cleavenger and Schultz will be the only seniors next year that won letters this year, the future isn't all that bleak.

More than half of the freshman from this year's team earned letters, including state qualifier Joe Calovich. In addition, five of 10 sophomores lettered and three have state experience.

Also, the team has a hole card that most have forgotten about: Alan Davis.

Davis, one of the fastest long-distance runners in the state, missed this season with a pulled quadriceps But he will be back next season.

"We'll have Alan back next year, and he's a real strong two-miler," Williams said.