Stakes were high for all the athletes gathered at Wichita's Cessna Stadium for the 2001 Class 4A State Track meet last weekend. The top three finishers would advance to Nationals and the rest would go home.

But competition level was also high. And as it turned out, only Tonganoxie's relay team finished in the top five.

Matt Needham, Tonganoxie senior, grabs hold of teammate Tony Aligo following the 4x800-meter relay. THS Coach Phil Williams said that Needham, in his final high school race, gave everything he had in the race. He ran the team's fastest leg at 2:04.

Only the best of each region was represented. This was by far the stiffest competition that the 10 track participants representing Tonganoxie had faced all year.

The girls competing for Tonganoxie were Aimee Eisman in both hurdle events, Erin O'Brien in the pole vault and Katie Jeannin in the 400 meters.

Chieftain Coach Phil Williams said it would have taken season- or career-best performances for team members to do well in Wichita.

And in the 4x800, the Chieftains' strongest event intersected with some of the stiffest competition. Baldwin, next to which Tonganoxie finished a fairly distant second to in its regional, had as its anchor the 800 meter state champion. Baldwin's Eric Black had defeated teammate and race favorite Matt Noonan with his two-lap time of 1 minute, 57.58 seconds.

But this year's Chieftain team had also turned in some strong times, and on any given day any relay team member was capable of turning in a sub-2:05 leg. 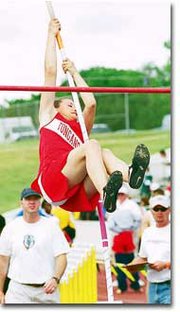 The team also has a strong tradition in the relay.

"We thought they had a chance to do pretty well," Williams said. "It's been one of our stronger events. It's the third year in row we've medaled in the event."

Last year the team took second with a time of 8:12.80. This year, the team took fourth place. Baldwin edged the Chieftains from a podium spot when Black took Baldwin from fifth to second on the relay's final leg.

But the Chieftain team still turned in one of its best times of the season, 8:21.30, which is only 10 seconds off the school record and equal to the team's season-best time.

Williams said that senior Matt Needham, in his final high school competition, had a great day, running the relay's fastest split in 2:04.80.

Aimee Eisman, who had qualified for the meet in both the 100- and the 200-meter hurdles, ran two strong races, but her times failed to lift her past Friday's preliminaries in either race.

"Neither one of her times was her personal best or anything like that," said Coach Bill Shaw. "But it was a good learning experience, and hopefully all the girls are proud of the year they had." 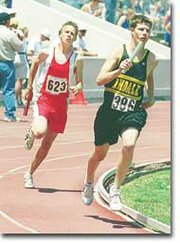 Tony Aligo tries to make the pass in his leg of the 4x800-meter relay at last weekend's state meet. The team took fourth.

Also in the girls preliminaries, Katie Jeannin fell short of advancing in the 400 meter with her time of 1:04.30. Erin O'Brien couldn't quite clear the eight-foot opening height in the pole vault and finished out of the placings.

In the boys pole vault, Sheldon Trieb breezed through the competition's opening heights, clearing 11 feet, six inches; 12 feet; and 12 feet, six inches all on the first try. But he wasn't quite able to get over 13 feet and also finished out of the placings.

Tony Miller's throw of 43 feet, 6 and three-quarter inches in the shot put earned him 14th place.

"Tony threw well," Williams said. "He would have had to gone 50 feet or so to make the top three."

Opening height for the high jump at the meet was six feet. Freshman Joe Calovich had never cleared that height.

He qualified for state with a 5-10 jump.

His body cleared the six-foot high bar with ease three times, Williams said. But three times his heels snagged it on the way over, knocking the bar off and ending his day.

"Everybody performed about how we thought they would," Williams said. "So I'm pleased, and I think the kids did a good job."