Lawrence shopper Dana Lattin and her daughter Sylvia, 4, look for vegetables at a good price. As food costs increase, many families are trying to maximize their dollars at the grocery store.

Smith, general manager of Checkers Foods in Lawrence, recently attended a food show and found himself taking yet another bite of bad news: the price he pays for corn oil and vegetable oil had risen to $1.78 a bottle, up from $1.15 less than a year ago. 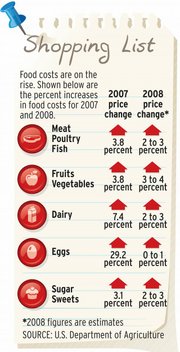 Overall, the government tells him, food prices should climb 3.5 percent to 4.5 percent this year - on top of last year's 4.2-percent increase.

And not a single category will offer relief.

"It's frustrating, but you have to work within the confines of the marketplace," said Smith, whose store shuns fancy displays and other frills to keep prices low. "That's the frustrating part, I guess: I haven't seen anything go down yet."

But some northeast Kansas residents refuse to accept the financial pain without a fight.

Whether it's coupon clippers in Shawnee, a gardener in Baldwin City or buying-cooperative members in Tonganoxie, folks are finding ways to soothe the economic indigestion brought on by increasing food prices.

Shawnee groceries report they haven't seen much of an increase in coupon usage, but that could be because many shoppers Continued from page 1A

"I'd say the trends are moving more toward private labels instead of national brands," said Kevin Thalken, store manager, referring to the Hy-Vee and Country Fresh brands the store carries.

On the soup aisle at Hy-Vee, Carol Tawney of Shawnee debated for a moment between the store brand and a name brand of chicken broth.

"My husband usually does the grocery shopping, and he's good at using coupons," Tawney said. "We definitely shop our prices; we probably spend more on gas driving from store to store to save 5 or 10 cents."

But as retirees, she said, coupons are important.

At Ball's Price Chopper, 12010 Shawnee Mission Parkway, managers reported no increase in use of coupons, though there is more interest in in-store coupons.

But as she left the store, Molly Jones of Kansas City, Kan., said she was making more of an effort to clip coupons.

"Oh, yeah, definitely," she said. "I try to grab the Sunday paper for coupons each week."

Help in a box

In the past year, Carlee Bunch, Tonganoxie, has noticed it costs about $100 more each month to feed her family of four.

"I think (grocery prices) are crazy," Bunch said. "But that's to be expected with everything else going up as well."

A $30 box of groceries includes meats, vegetables, fruits, pastas and desserts. Each month, menu items vary and may be viewed at Angel Food Ministries' Web site, angelfoodministries.com. There are no income restrictions for people ordering food and no limit on the number of boxes purchased.

"We have a very dedicated group of people that come back every month," said Bunch, who until recently was the program's director. "I've used it a lot of times. It's a great program to supplement your everyday groceries, and it's been a blessing to a lot of low-income families."

Marc and Amanda McEachron have taken over Bunch's position as the program's new directors.

"It's great for people that are trying to make the best of their dollar," he said.

To participate in the program, Bunch said people need to sign up for the program at the church during any of the scheduled order days, which change monthly. For more information, contact the church at (913) 369-2600.

In addition to Cornerstone, First Baptist Church of Linwood also is a host site for Angel Food Ministries. Call (816) 835-1417 for more information.

Bill Neuenswander isn't concerned by the high price of vegetables or even honey. His large garden and beehives take care of that.

There was a time when he "pinched pennies" by growing huge gardens and canning the produce, but it's now more of a hobby for the rural Baldwin City man.

"When my kids were young and my wife canned, it provided food for us year-round," said Neuenswander.

In addition to tomatoes, potatoes and beets, he grows cucumbers, onions and radishes. He has fruit trees and grapevines. His bees generate "the best honey you can get." But cutting costs is not his motivation.

"Gardening is just kind of enjoying God's goodness," said Neuenswander, who has been in education his entire career and is now a special assistant to Baker University President Pat Long.

Sometimes Neuenswander barters, which got him out of the corn-growing business. He smokes a ham every Christmas for a friend of his son. The friend, in turn, gives Neuenswander as much corn as he wants. He puts up 150 quarts of corn each summer.

"I don't want to give my age away, but I've been gardening for 50 years," he said. "At one time, I had 2 acres. There was a time I grew so much food that people would lock their cars so I wouldn't put stuff in it."

As northeast Kansas residents look for ways to slice their grocery bills, the military continues to offer more reasonable prices on food and household items to its members and some retirees.

Maj. Scott Holland, an active duty officer who lives in Lansing, said he and his wife, Kippy, have used commissaries at U.S. Army installations for years.

Commissaries are run by the Defense Commissary Agency - or DeCA - under the U.S. Department of Defense. Shoppers are exempt from sales tax.

"Commissaries are affected by the same market forces as commercial retailers, but because commissaries sell at cost plus a 5 percent surcharge, shoppers will always benefit from lower prices in the commissary and an average savings of 30 percent or more on their purchases," said Nancy O'Nell, a public affairs officer with DeCA West.

Between a call from his wife telling him to pick up bananas and crossing items off of a long grocery list, Holland explained that the price of some foods - milk and meat, for example - has increased recently. But for the most part, prices are steady.

This year's rising food prices come on top of last year, when such costs climbed by 4.2 percent, USDA said. Rising costs for grains - ingredients in many grocery products, and feed for animals that produce other products - helped push up prices for beef by 4.4 percent, dairy products by 7.4 percent and eggs by 29.2 percent last year.

Smith's seen all of those costs rise at Checkers.

"We just react to what the market bears, really," Smith said. "Dairy was the first to go up - cottage cheese, milk. The next thing to come is anything wheat-based because of the rising price of wheat. That's flour, anything with pasta in it."

Escalating fuel costs also figure in. Buying cereal and bakery products - items particularly reliant on wheat, a commodity now selling at near-record price levels - will cost consumers another 5.5 percent to 6.5 percent this year, the USDA projects. Increases for dairy, eggs and meats will ease somewhat, according to USDA, but nobody expects any dramatic drops.

"We've been calling it an inflationary spiral," Smith said. "Inflation is coming, so we have to react to it."