Tonganoxie High shortstop Kaitlyn Wolken tries to block a Jeff West runner from third base in the Chieftains' 6-2 loss to the Tigers on Thursday at Leavenworth County Fairgrounds. Wolken helped THS bounce back with a 15-14, extra-inning victory to split the doubleheader. Enlarge photo 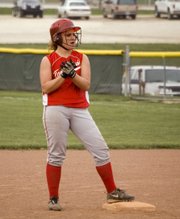 Tonganoxie senior Lindsey Fatherley claps at second base after driving in a go-ahead run in the bottom of the sixth inning of the Chieftains' first game against Jeff West Thursday. Although THS lost, 6-2, Fatherley came through with another clutch hit (a two-run single in the seventh) of the Chieftains' 15-14 extra-inning victory in the second contest.

The Tonganoxie High softball team blew a nine-run lead but found a way to recover and win in extra innings to split a Thursday twinbill with Jeff West.

After falling, 6-2, in the first game of the day, the Chieftains edged the visiting Tigers, 15-14, in eight innings at Leavenworth County Fairgrounds.

THS catcher Makayla Leslie led off the bottom of the eighth inning with a walk and was replaced on the base paths by courtesy runner Emily Stafford.

After Hannah Kemp popped out on a bunt and JWHS attempted to double up Stafford at first base, she got to second thanks to an off-target throw.

With one out, Haley Smith laid down a sacrifice bunt to advance Stafford to third base.

That brought up Tonganoxie’s ninth hitter, Kailin Kuzmic. After she hit the first pitch just two feet foul of the right-field line, Stafford scored the game-winning run on a wild pitch.

The Chieftains (1-1) were off to a great start in the victory, leading 11-2 after four innings. But the Tigers came roaring back with five runs in the fifth, three in the sixth and four more in the seventh, which gave them a 14-12 advantage.

The 11-run swing could have deflated THS but the home team put together a seventh-inning rally to force the extra inning.

With one out, leadoff hitter McKenzie Knight singled to center field. After Brooklyn Kerbaugh popped up, putting Tonganoxie one out away from an epic collapse, Kaitlyn Wolken came to the plate and was intentionally walked.

Senior third baseman Lindsey Fatherley stepped in the batter’s box as the team’s last hope and got a pick-me-up in the form of a wild pitch that allowed Knight and Wolken to move into scoring position.

Fatherley delivered a two-run single to center field to tie the game at 14.

The Chieftains plated just one run in the sixth inning, but that ultimately proved critical as well. With THS up 11-10, Wolken led off the inning with a triple — her second of the game — and Tiffany Jacobs knocked her in with a single to left field.

Tonganoxie used four pitchers in the up-and-down affair. Jacobs started in the circle and threw the first five innings, striking out four Tigers.

Angela Jacobs, who threw six and a third in the first game, entered in the top of the sixth but only lasted a third of an inning after a line drive ricocheted off her leg.

Nikki Pennington came in with one down in the sixth and runners on first and third. She went on to strike out two batters in an inning and two-thirds of work.

In the top of the eighth, Kerbaugh entered and kept red-hot JWHS from scoring. She struck out the first batter she faced and after the second batter reached on an error, Kerbaugh fielded a grounder and helped THS turn a rare 1-3-6 double play.

Offensively, Wolken led the way for the Chieftains in the extra-inning victory. The junior shortstop was 3-for-3, drove in a run and scored five times.

Angela Jacobs went 3-for-3 with two RBI. Tiffany Jacobs was 3-for-4 with three RBI. Fatherley ended 2-for-4 and Knight was 2-for-5.

In the 6-2 loss, the Chieftains had just six hits — one apiece from Kerbaugh, Wolken, Leslie, Fatherley, Cuzmic and Knight. Leslie and Fatherley each drove in a run.

Tonganoxie doesn’t play again until Thursday at 4:30 p.m. at Basehor-Linwood.