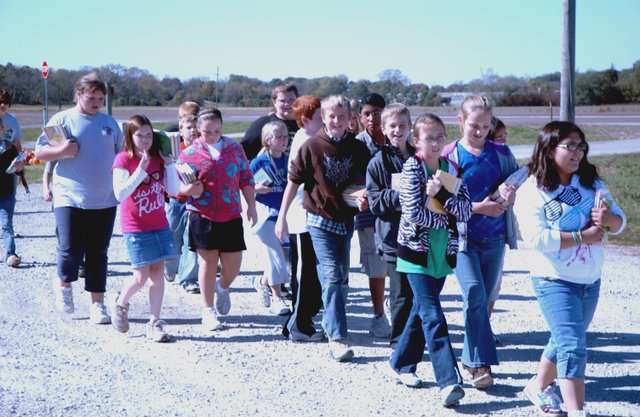 Linwood Elementary School students near the end of an about seven-block walk to deliver books for the old library in downtown Linwood to the new Linwood Community Library in a former café on Kansas Highway 32. Library director Sue Peavy said the move new library will double available public space to 3,500 square feet. An open house for the library’s opening will be at 2 p.m. Sunday and the new building will be open for business Monday.

It wasn’t the most efficient way to transfer books to Linwood Community Library’s new building, but it was popular and meaningful.

On Thursday afternoon, a column of Linwood Elementary School students walked the about seven blocks from the old library downtown to the community’s newly remodeled library on Kansas Highway 32 in the east part of the southern Leavenworth County community. The students all carried books from the library’s children’s collection to the new site.

“It’s a good way to show them how to get to the new library and get them to take ownership in it,” she said. “Some of the kids said, ‘She worked at the old library.’ They were surprised we were going to have the same staff.”

Students also were aware the young readers’ area was the kitchen of in the building’s recent days as a café, Peavy said. The four-month renovation was a community project, she said.

As part of that effort, the Linwood Lions Club spent two hours Saturday moving all but the books the students moved Thursday, Peavy said.

The students arrived as workers finished a punch list of final remodeling details. An open house for the new library will be at 2 p.m. Sunday and the new building will open Monday.