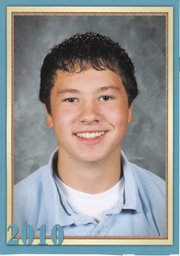 A student at McLouth High School has died while on a school trip to Costa Rica, the victim of an overnight shooting.

Justin Johnston, 16, was on a nine-day trip with 12 students and sponsors, according to a person who was briefed about the situation by officials with the McLouth school district. The students are in Spanish 3 and Spanish 4 classes at the school, and the trip is the first for the Spanish Club and its sponsors.

The students were traveling with the school’s Spanish Club. The trip was arranged through EF Educational Tours based in Cambridge, Mass.

No other students were injured. McLouth Superintendent Steve Splichal will address the media and is expected to provide additional information at a 4:30 p.m. press conference. Classmates and neighbors of Johnston are planning a memorial service for 8 p.m. Thursday night in the parking lot at the high school.

"The safety and security of the students and sponsors is imperative to the school district," McLouth school leaders said in a press release put out at 2 p.m. Thursday afternoon. "District officials are working with EF Educational Tours to ensure their safety and to make travel arrangements for an early arrival home. EF Educational Tours is taking steps to make counselors available to the students and sponsors. District officials have been in close communication with families who have students on the trip."

Parents of students on the trip have been receiving information from their children, via text messages.

According to a report from the Costa Rican newspaper The Nation, a guard at the hotel at which the group was staying shot Johnston. The shooting took place at 4 a.m.

The group was staying at the hotel La Cangreja Lodge in La Fortuna, according to the report, adding that the student chaperones were staying in separate rooms from the young men and women they were accompanying.

“During the night the boys left the rooms they were checked in to and when they returned, apparently, so as not to attract the attention of security guards, they came close to a barbed-wire fence belonging to an adjoining property, but a dog startled them when it began to bark,” according to the report.

Police stated that the guard shot into the air, which frightened the boys even more, sending them running toward the hotel. The guard, according to the report, was frightened thinking he was being attacked. He shot, fatally wounding the 16-year-old student.

It is reported that the weapon, a .22 caliber pistol, was not registered.

The students had raised money for the trip through a variety of sources, including sales of candles and other items. The McLouth students left Monday and flew to Houston and on to Costa Rica, and they were to meet up with students from two other schools from outside the area.

The district alerted the school community about the death via text message Thursday afternoon.

This is the second time a northeast Kansas student was killed while on an educational trip to Costa Rica.

Shannon Lucile Martin was only a few days from graduating from Kansas University in May 2001 when she was murdered in Golfito, Costa Rica, while walking to her residence after a night out at a disco. She had been in Golfito finishing a class project to collect rare fern samples.

The KU student had a compassion for the Costa Rican community where she was murdered. An English language center that bears her name was opened inside the Costa Rican Coast Guard Academy and is being used to teach English to Golfito residents and Coast Guard cadets.

Information from the article on nacion.com translated by Jessie Mathews.

My prayers go out to the family on the lost of there love one.

That is terrible. Sounds like the boys were just being teenagers and for sure none of them deserved that at all. Condolences to the family.