Tammy Wagner is looking at 2013 in a different light thanks to brain and spinal cord surgery nearly a year ago that's required substantial rehabilitation. 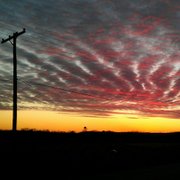 Tammy Wagner captures Tonganoxie at sunset in this photo. Wagner has been snapping several photos after her surgery removed cavernous malformations in her brainstem and spinal cord.

Tammy Wagner had recurring dreams about the No. 7 more than a year ago.

“Maybe you should go to the boats,” her husband, Gary, joked after hearing his wife tell of her unique dreams.

But for Tammy, she found the dreams to be more than just mere luck.

In September 2011, Tammy, who at the time was working for Macy’s as a jewelry district executive, was flying back to Kansas City, Mo., from Orlando, Fla., on a business trip when she started to get a horrendous headache during the flight. She rested for a couple days in her Tonganoxie home, but didn’t feel much better. She had issues with her vision. When it came to simple routines such as getting a drink of water, she “had to stop and think how to do it.”

Tammy visited her optometrist, who referred her to a neuro opthamologist.

An MRI told of bad news roughly a month later on Oct. 6, Gary’s birthday — Tammy learned she had cavernous malformations, or angiomas, in her brainstem and spine. The malformations are abnormal clusters of blood vessels embedded in normal brain tissues that can occur throughout the central nervous system. The malformations are lesions that can leach blood into the brain and affect about 0.1 percent of the population.

Area doctors told Tammy the size of the malformations in her brainstem made it difficult to operate.

“The risk wasn’t worth the reward,” Gary said, recalling what doctors said about potential surgery.

Tammy, who is 44, remembered feeling helpless that day.

“I just accepted that if it’s God’s will, if I’m supposed to die, don’t let me suffer,” Tammy said.

Tammy said she wasn’t overly religious, but at that point, she was going to “turn it all over to God.”

The Wagners started attending Tonganoxie Christian Church and Tammy pledged to live each day to the fullest.

She started taking photos with her smartphone of anything and everything.

She started painting and writing poetry, things she previously had not done.

Then one day, her dreams somehow started to make sense.

The Wagners traveled to Missouri to see their oldest son play winter baseball at North Central Missouri College where he was a catcher.

On the drive home, Tammy received a call from a distant cousin in Texas she hadn’t talked to in more than 25 years.

The cousin and her daughter heard through family of Tammy’s condition. Both the cousin and daughter had cavernous malformations and had successful surgery.

When she heard the news from her relative, Tammy broke down.

“I felt such a relief,” she said. “I had a feeling I knew then everything was going to be OK.”

Tammy’s cousin referred her to the Barrow Neurological Institute in Phoenix.

Tammy contacted the institute about surgery.

And then, a month after hearing from her cousin — on Jan. 7, 2012 — someone from Dr. Robert F. Spetzler’s office at Barrow called. Less than two weeks later, Tammy was in Phoenix. Spetzler performed brainstem surgery that lasted 6 1/2 hours. About a week later, Tammy underwent spinal cord surgery.

Gary said the surgeries were nerve-racking.

“You start thinking about a lot of things in 6 1/2 hours,” he said. “You reflect on everything you’ve done in 20 years of marriage.”

Both Tammy and Gary were baptized this past winter and continue to count their blessings.

“In a blink of an eye, everything can change,” Tammy said. “I feel as though this didn’t’ happen to me, it happened for me.”

Recovery from the surgeries didn’t come without challenges. Tammy had to be immobile for some time after the surgery. She then went through four months of physical, occupational and physical therapy in Kansas City, Mo. She still experiences some numbness on her left side, suffers from fatigue, has short-term memory loss and has double vision in her right eye. She’s wear a corrective lens in her glasses for the double vision, but is scheduled for eye surgery later this month.

Church members and others have shown support through the family’s challenges.

A fellow church member had a vacation home in Phoenix and offered it so Gary would have somewhere to stay when Tammy had surgery.

Others offered food and financial assistance as the family became a one-income household.

Macy’s adopted the family for Christmas 2011, providing Tammy and Gary’s children, Jeremy, 19, and Justin, 16, with presents and the family financial assistance.

Though the family has trimmed its budget because of medical costs and Tammy being unable to work, Gary said the family is closer than ever.

Tammy said she appreciates being a stay-at-home mom and spending more time with her family.

“I seriously think if you just let certain things go and realize you can be happy without being so materialistic or concerned about the things that don’t matter, you can truly be happy,” she said.

To help out his family, Jeremy moved home and now attends Kansas City Kansas Community College. He plans to make a return to baseball next year.

Tammy’s sister died at the age of 38 in 2003 in a Joplin, Mo., hospital. Doctors said she died from an epileptic seizure in her sleep. Her medical records were lost in the 2011 Joplin tornado, but it’s Tammy’s belief that her sister suffered from the same ailment. In some cases, cavernous malformations can be hereditary.

As she prepares for eye surgery, Tammy continues to write poetry, capture photos and paint subjects. So far she has painted scenes she’s captured on her phone, as well as the family dogs. She also writes in a daily journal and gains inspiration from Louise Krug, a Lawrence woman who suffered from a severe cavernous angioma in her brain. Krug wrote “Louise: Amended, a Memoir by Louise Krug,” which chronicled her journey.

As the Wagners head into the new year and approach the one-year anniversary of her surgery, they say they are thankful for the support they’ve received.

They even offered resolutions for 2013.

“For me, it’s just to have God in my life more,” Tammy said. “To pay back to serve others. Just to be simple.”

For Gary, he plans to not take time for granted.

“To me, it’s appreciate your day,” he said. “Don’t always look for what you can get.

“I want this. I want that. We don’t even do that anymore.”

God bless you and your family as you work through your illness. Never doubt for a minute that God will answer your prayers and be with you every step of the way. Our family has experienced a life-changing diagnosis so I know what you are going through. You will be in my prayers. Blessings, Judy Ward