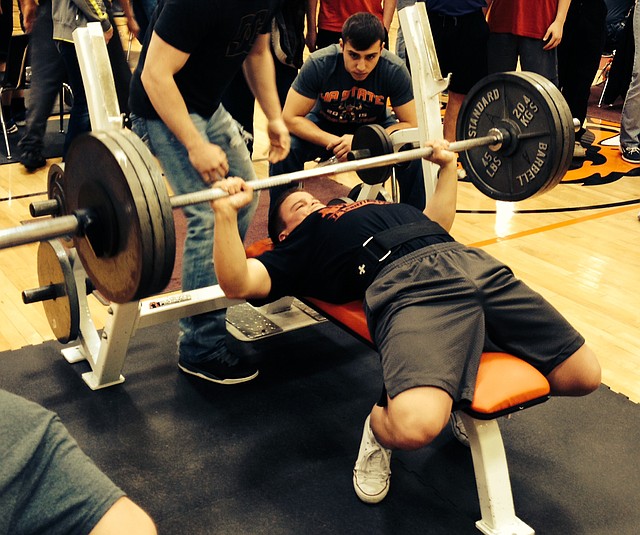 Seth Wolf lifts in the bench press during Saturday's Class 4A state powerlifting championships. The senior borke the state record in his weight division with a successful lift of 325 pounds.

The Tonganoxie High powerlifting team has been in existence for less than a decade and has continued to make strides.

Saturday, the team reached another milestone.

The THS girls team placed second overall at the state meet at Clay Center Community High School, marking the highest finish for either the boys or girls at state.

Tonganoxie competed against about 25 schools from across Kansas.

“That was our goal coming in,” said coach Matt Bond. “We thought we could get second place on the girls side.

“We were really pleased with that. The boys side I just don’ have many seniors.”

Bond said THS had about 50 students compete at the event, which was the second highest compared to Basehor-Linwood. The Bobcats had about 80 students participate.

The Chieftains had several top performances, including

Nicole Zerrer placed second in bench press in the 105-pound division, while Kristen Shriner, another sophomore, placed third overall at 148.

“That was a surprise,” Bond said. “I knew she could do well. That was a pleasant surprise.”

On the boys side, Cameron Cash was second runner-up overall at 114, while Justyn Leslie placed fourth overall at 242.

The biggest THS accomplishment on the boys side came in the 181-pound division.

Senior Seth Wolf took third overall and broke the state record in bench press with a lift of 325 pounds.

“He’s a kid who has been dialed in and focused for this school year,” Bond said. “That always was a goal of his. Last year he was close to it.”

The THS squad opened the season around Thanksgiving. The Chieftains competed in four meets — at McLouth, Royal Valley, Basehor-Linwood and Horton — before Saturday’s state meet that had some 415 athletes competing.

Bond said the powerlifting benefits athletes who compete in other sports.

“Whatever your sports endeavor, it’s definitely going to help you,” Bond said.

It helps athletes to get stronger and get experience in a competitive atmosphere, but also provides an opportunity for many students.

“More importantly, I’ll get all kinds of kids,” Bond said. “I get kids who may not be athletes. This is their event. This is where they gain confidence.”

Though it’s not currently a Kansas State High School Activities Association sport, most classes have state competitions. Class 2-1A is combined into one, while the other classes have their own state meets.

The sport started gaining popularity in this area in 2007, with Basehor-Linwood first getting started. Bond started Tonganoxie’s program a year later.

BLHS has been tough to beat, as the squad won both the girls and boys titles.

The BLHS girls won their eighth straight title, finishing with 149 points to Tonganoxie’s 49 points for second.

Bond said the team worked on its lifts during strength classes and after school on Mondays, Wednesdays and Fridays.

— For more results from state, look at next week’s print edition of The Mirror and online at tonganoxiemirror.com.