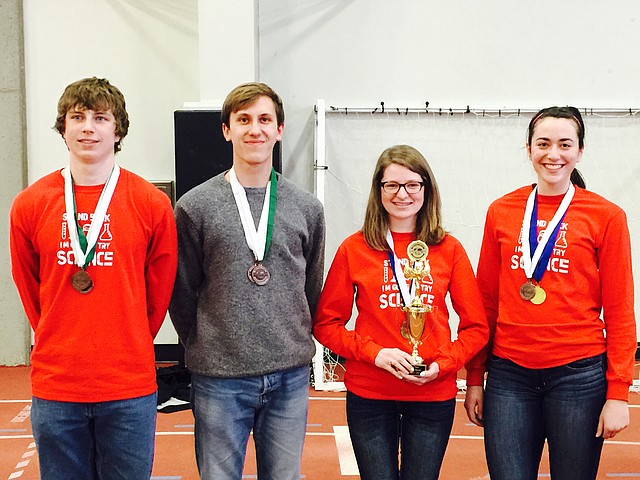 Seniors on this year's Tonganoxie High School Science Olympiad team are, from left, Garrett French, Brad Andrews, Danielle Irwin and Grace Reilly. THS will compete April 4 at the state competition on the Wichita State University campus. The squad placed third at regionals a few weeks ago at Johnson County Community College. THS was the top team in the small-school division. The squad placed second at state in its division last year.

The Tonganoxie High School Science Olympiad team continues to make a name for itself on the state level.

“Our first year at state, they didn’t know how to pronounce Tonganoxie,” said Christine Biel, one of the team’s coaches. “They mispronounced it 20 times.

“But now that we’ve been there awhile, they know how to pronounce Tonganoxie.”

THS placed third at regionals a few weeks ago with 125 points. Like golf or cross country, low score wins.

St. James Academy won the regional with 70 points, while Olathe North placed second with 88. McLouth came in eighth with 208 points

When THS heads on to state April 4 at Wichita State University, the squad will compete in the small school division. That means Tonganoxie was the top small school in the region.

“They just go do their thing and we just kind of field any problems,” Biel said. “It’s all the kids. We have a great science department. They are rock stars.”

Grace Reilly and Danielle Irwin won first in anatomy, while Spencer Finkbiner and Monica Maurer teamed up to take first place in the disease detectives event. And taking first in protein modeling were Reilly, Finkbiner and Sierra Staatz.

Taking fourth place were Nick French and Crow in air trajectory and Lingo and Nate Bothwell in green generation.

Tonganoxie also had some fifth- and sixth-place finishes at regionals.

Garrett French and Andrews placed fifth in fossils, as did Sandburg and Puebla in the “mission possible” event and Tollefson and Allison Williams in the “Wright stuff” competition, which involves airplane building.

Finishing sixth in dynamic planet were Williams and Staatz and in geological mapping, Nick French and Tollefson.

Biel continued to praise the THS team, noting many schools have an actual Science Olympiad class devoted to preparing for the competition. At Tonganoxie, students generally practice and prepare for events outside of school hours.

Other teachers in the THS science department also do their part to assist with preparing the students.

“We really could not have done it this year without them,” Biel said. “I really need to bake them a cake or something. They were just awesome. Holycow.”

THS has a little bit of time to prepare for state next weekend at WSU.