Super Bowl LIV MVP Patrick Mahomes claps while taking part in a parade Feb. 3 at Walt Disney World. Paula and Steve Gish of Tonganoxie got to see Mahomes in the parade.

The stars seemed to align just right for a magical football season in Kansas City for the Chiefs Kingdom.

The same could be said for Steve and Paula Gish as they got to see the Chiefs’ biggest star shine bright in the Magic Kingdom.

The Tonganoxie couple had made plans months ago to spend the first weekend in February in Florida for Steve’s birthday. Paula’s sister lives near Sarasota, Fla., and it’s become a nice getaway and place to celebrate Steve’s birthday, which is Feb. 6. 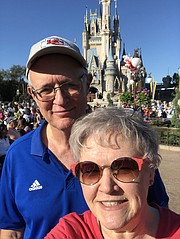 Paula and Steve Gish, Tonganoxie, are at the parade Feb. 3 at Walt Disney World in Orlando, Fla., for Patrick Mahomes. The couple was visiting family during a trip planned well before the Chiefs made their playoff run toward their Super Bowl chmampionship in Miami.

So when the Chiefs defeated the Titans in the AFC Championship, the Gishes knew the hometown team would be playing down the coast in Miami.

“Three hours, 17 minutes,” Steve said, reciting the exact travel time from Lakewood Ranch near Sarasota to Miami. “We checked it out because we were wanting to go.”

Paula said they discussed making the trip to take in the Super Bowl festivities, but as Paula pointed out, her sister’s television was a pretty good place to watch — and it didn’t require upwards of seven hours on the road.

Instead they could spend that quality time with sister DeeDee Mars and her family.

So the Tonganoxie couple watched the game on TV and celebrated Kansas City’s thrilling victory with their Florida family.

“And then in ‘71 when they lost to the Dolphins (in overtime), I thought they were going to be good forever,” Steve said with a laugh.

Fast forward to the excitement of this year’s Super Bowl victory, Steve said he really liked that special play the Chiefs ran that was crafted from a play in the 1948 Rose Bowl and somewhat resembled the single wing.

“It made me think of Hank Stram,” Gish said, referring to the Chiefs’ legendary coach who led Kansas City to its first Super Bowl. “It had a Hank Stram feel to it with all the shifting and all of that.”

With a furious comeback, the Chiefs got the victory and the family of course celebrated.

They went to bed after witnessing the Chiefs’ second Super Bowl title 50 years after the first.

Then came the next day.

Bright idea in the Sunshine State

“I got up at nine in the morning and said ‘I think we should go to Disney World,’” Paula said. “We didn’t talk about it before we went to bed.”

The parade was the day after the Super Bowl and the Gishes were about a two-hour drive from the Magic Kingdom.

“I’m not a real spur-of-the-moment kind of gal,” Paula explained. “I like to have a plan, but I’ll make an exception for Patrick Mahomes.”

There were Chiefs fans galore at Walt Disney World, as they lined up for the parade.

The Gishes wouldn’t be back until a couple days after the Chiefs Kingdom Champions Parade, so they went with the Patrick Mahomes parade instead. Paula said the parade started near Cinderella’s castle, but it was a pretty succinct parade.

“It was shorter than ours here in town,” Steve said with a laugh, referring to the parade route in Tonganoxie down Fourth Street.

Paula said Mahomes seemed to be enjoying the parade, but it was a different scene.

“He seemed like he was having a good time, high-fiving Mickey on the float,” she said. “I would say the atmosphere was a little more G or PG than the parade on Wednesday.

Mahomes also met with youths on hand through the Make-a-Wish Foundation and rode some rides with them.

“He wasn’t up there with Travis Kelce, let’s put it that way,” Paula said with a laugh.

Instead of Kelce, it was Mickey Mouse riding alongside the Super Bowl MVP. Once Mahomes saw more and more Chiefs fans lining the Disney World streets, he started to warm up to the crowd even more with his signature double-arm muscle flex, according to Paula.

The massive turnout in downtown Kansas City, Mo., for the Wednesday, Feb. 5, parade and the ceremony to follow near Union Station was estimated at 1 million people. Though the Disney World crowd was big — and dominated by people in Chiefs gear — it wasn’t quite as big as that turnout.

And though the Gishes weren’t back in time for the Kansas City parade, they were nearly elbow to elbow with many fellow KC fans.

Paula and Steve headed out the Friday before the Super Bowl on Jan. 31.

Numerous Chiefs fans were on their flight to Punta Gorda, which was more than two hours away.

“I would say half of them, maybe even a third had tickets, but the rest didn’t because they were all looking for tickets on the plane.

“It kind of seemed like people from Kansas City started booking flights to Florida and then trying to come up with a plan once they got there.”

Another opportunity coming in 2021?

If the Gishes decide to celebrate Steve’s birthday in the Sarasota area again next year, they might get another chance to see the Chiefs in the Super Bowl.

The Super Bowl rotates from NFL city to NFL city each year, with next year’s not being too far up the road from this year’s game.

Super Bowl LV will be played at Raymond James Stadium, home of the Tampa Bay Buccaneers.

Tampa is about an hour away from Sarasota.

If the Chiefs can make a repeat Super Bowl trip next season, the Gishes just might join them Feb. 7, 2021 — with a little bit of planning.