Brandon Masur's light show declares that the Chiefs are AFC Champions in this partciular photo.

Brandon Masur labored over his new love of a Christmas light show for a full year.

Thanks to a dream season with one game to go for the Kansas City Chiefs, Masur is able to enjoy the fruits of his labor just a little bit longer.

Masur, a Leavenworth City firefighter who lives in Tonganoxie, decided last Christmas that he wanted to be part of a growing hobby across the nation that takes holiday decorations to a new level with light shows.

And then, 3,500 LED pixels, 1,000 feet of wire and “hours and hours and hours in the garage drilling PVC pipe” later, Masur had his masterpiece: a colorful light show set to Christmas songs and an added bonus — a Chiefs song.

It's time for Super Bowl LIV and the two teams squaring off: San Francisco and Kansas City.

His house is in the Jackson Heights subdivision along North Oak Terrace.

Though the holiday season was over and neighbors had taken down their decorations, another season was about to begin.

The Chiefs made the playoffs once again, only this year, something different transpired: Kansas City was headed to the Super Bowl for the first time in 50 years.

So Masur kept his Chiefs light show going through January as Kansas City advanced in the playoffs. And then came the Jan. 20 game against Tennessee, a 35-24 Chiefs victory at Arrowhead Stadium that propelled Kansas City into Super Bowl LIV.

Masur added to his “Red Kingdom” show with audio clips of the postgame interviews and celebrations from that momentous victory. Visitors can listen to all of the audio that complements the show on 88.3 FM.

“This is just a surreal time right now,” Masur said about the Chiefs advancing to the Super Bowl. “I didn’t know if we would ever see the day in my lifetime.”

Of course, as Masur noted, that was the thought process for folks who have been longtime supporters of Kansas City’s baseball team.

And then the Royals made the World Series in 2014 and won it with a return trip the next year.

The light show has been popular in Tonganoxie for Chiefs fans, but the excitement has spread well beyond the city limits.

Kansas City television news affiliates came out to interview Masur about his creation. They found out about the show thanks to social media.

Video of the show has surpassed 150,000 views on Facebook and 1 million views on Tik Tok. Another video on twitter has reached 60,000 users.

“It’s definitely made its way around,” Masur said.

Originally from Baldwin City, Masur said he’s always been into decorating at the holidays, starting with his younger years when his mother would put him in charge of decorations. 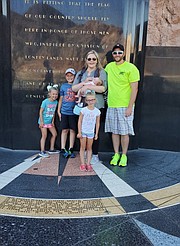 Tonganoxie resident Brandon Masur has become a light show enthusiast. With him are his family: wife, Lindsay, and children Jackson, 9, Atleigh, 7, Harper, 6, and Sydney, 7 months.

Masur also has always been mechanically inclined, he said. He has a background in mechanics, but not the technical side of the light show, so that took a lot of research and learning.

“I’m a tinkerer for sure, but not an IT guy by any means,” Masur said.

He said the electronic side of the light show was the most time consuming. He also had to build the workings from scratch and now has four control boxes that run the various light sequences.

“It really becomes an obsession once you see things work,” Masur said.

People also have come from near and far to see the show. There even was a family that made a two-hour trip as a surprise for their children. Masur happen to look out his window when that family was there. He learned of the family’s back story after seeing their social media posts about the experience.

“People really dig it,” Masur said. “I’ve not had a bad experience with it.”

Masur isn’t sure where he and his family will watch Sunday’s game, though it very well could be right there among the festive light show.

The light-show enthusiast also got to perfect some cleaning skills because the PVC pipe shavings tended to follow him throughout the house after working in the garage. He said his family had a steady routine of Masur vacuuming and cleaning up those shavings. But it’s also a treat to share the experience with his family: wife, Lindsay, and children Jackson, 9, Atleigh, 7, Harper, 6, and Sydney, 7 months.

Masur has vowed to build on this year’s show next year. He also wants to pursue some opportunities he’s seen come about elsewhere. In some communities, the light shows have become a fundraising event for charity.

He hopes “create something positive” in Tonganoxie.

Until then, the countdown to Super Bowl Sunday is on.

That means the inaugural year of Masur’s light show gets to go on a little bit longer.

Whatever happens Sunday, it’s been a fun ride and a chance for Masur to share some joy — even with folks who might not be enthusiastic about that team that wears red and yellow.

“Even people who aren’t Chiefs fans … ‘I’m a Raiders fan, but this is the coolest thing,’” recalled Masur, referring to social media comments from a diehard fan of the Chiefs’ archrival.