Chris Weller and a buddy at Solomon High School decided during their sophomore year that they wanted to go into education as industrial arts instructors.

Both went to Fort Hays State University after SHS to major in education.

That friend was Pete Meagher, who finished his teaching career in industrial arts at Salina Central High School a few years ago.

On Friday, Weller did the same at Tonganoxie Middle School.

Longtime Tonganoxie educator Chris Weller stands with fellow Tonganoxie Middle School teachers Megan Carlton and Phil Jones outside TMS during a celebratory welcome back to campus for the TMS Battle of the Brains winners this past fall.

Weller retired after 39 years teaching industrial arts at Tonganoxie Junior High and then Tonganoxie Middle School. Like Meagher, Weller spent his entire career in one school district after FHSU.

“Thank God for Steve McClure and Marvin Pine for hiring me,” Weller said, referring to the district superintendent and principal, respectively, selecting Weller for the job in the early 1980s. “We’d only planned on staying a couple years and then go back to central Kansas, but we loved it here, so we stayed. It’s really a great community for your kids to grow in.”

Chris’ wife, Marilyn, also was from Solomon and went to FHSU. She accepted a job at University of Kansas Medical Center, and the sweethearts moved to this corner of the state.

“This job became available, so I took it,” Weller said.

Weller’s first classroom was in the Quonset hut near Third and Shawnee streets. That was part of the junior high when the elementary and junior high school campus was together in the downtown district. Weller then moved to the new junior high (now the high school west campus building) in the late 1980s and then to the current middle school on Washington Street in the 2000s.

He started out teaching seventh-grade industrial arts classes and has taught grades 6-9 at one time or another.

For some 35 spring seasons, he coached THS track in some capacity, including the girls head coach spot from 2005-13. During Weller’s tenure as a jumps coach, THS sent high jumpers to state 20 years in a row.

“A lot of times, it was three kids and the max you could take was four,” Weller said, referring to the number of athletes who could qualify for state from one team.

“Coaching track with Williams and Shaw, that was a blast,” Weller said. 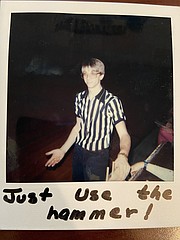 Though Weller never could have imagined the last day of his career happening during a school year that didn’t involve an actual school building for the final two months, he praised his fellow electives teachers at TMS.

“They’re just a great group,” Weller said of his colleagues. “They get me through the technology. I’m not great at computers.

Students brought joy to the longtime educator often, but Weller said project pickup time usually was the most gratifying for him. Students got to take home the fruits of their labor when a project was complete.

“They would just be so happy and proud about what they made,” Weller said. “Parents are always going on about how good of a job they did and how happy they were about it.”

Some of the projects weren’t necessarily the stuff that HGTV Channel shows are made of, but the effort was pretty much always there.

“I had a student who worked really hard, but probably did not have that much talent in industrial arts,” Weller said as he reminisced. “Every time he would finish a project, he would say ‘my mom said this would look really great at the cabin.’

“I’m not going to name this student, but he still lives in Tonganoxie and so does his parents.”

Chris Weller teaching a class during the 1980s in Tonganoxie.

When Weller started his career, it had been customary for the industrial arts teacher to instruct students in making CO2 cars.

“When I came here, I didn’t know what it was, so I got a book and started reading on it and set up the track and we made CO2 cars,” Weller said.

The cars have an 8-gram carbon dioxide cartridge like one would put in a BB gun. A machine then fires the cars off and they speed furiously down the track.

“They go about 20 meters in a little over a second,” Weller explained.

The teacher proceeded to make the project a part of his course for 39 consecutive years.

“My car still is the best ever,” Weller said.

And he always has let his students know that.

“It gets them motivated,” he said. “I always tell them ‘your car will never beat my car.’ I don’t always win, but it’s fun giving them a hard time.”

Chris Weller teaching junior high classes when the junior high was part of the elementary school campus between Third and Fourth streets.

Weller has guided his students through many an industrial arts project, including “2 billion pop can lamps.”

The students made lamps with pop bottles and cans wired to create a small lamp.

The last few years, Weller and his family have also watched the community come together to raise money for THS scholarships in his wife’s memory with the Miles for Marilyn run and walk. Marilyn died in 2017 after a battle with cancer. She spent 32 years working in physical therapy in Leavenworth County schools. This year’s run took place despite the COVID-19 pandemic. The virtual race — runners were encouraged to run on the originally scheduled race day or whenever they could — netted $2,500 for THS scholarships.

Their oldest daughter Ashley Gepner taught for several years and now is a stay-at-home mother in Tonganoxie, while another daughter, Madison Weller, is a photographer for a hospital in Charlotte, N.C.

Weller has six grandkids, so he anticipates they’ll continue to keep him busy in retirement.

He also wants to travel to Europe and take more trips throughout the United States when it’s safer to travel again.

As for celebrating his retirement, he hopes to do get that accomplished this summer.

“I work with a group of very, very talented elective teachers who teach at the middle school,” Weller reiterated. “In my 39 years of teaching, this is the funnest it’s ever been, I think.”