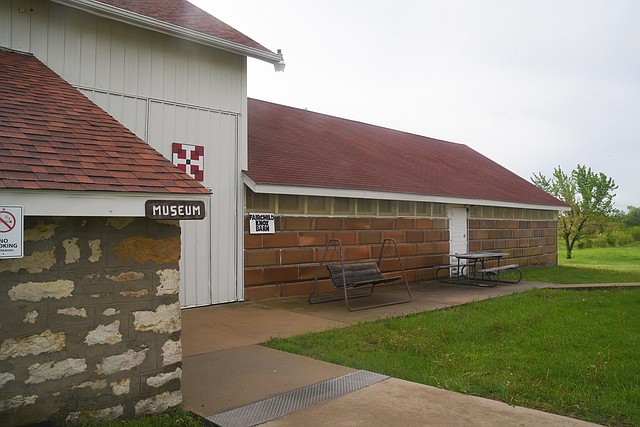 The Tonganoxie Mirror, in conjunction with Internet Direct, is ready to bring the internet to Tonganoxie and Basehor; the question remains whether Basehor and Tonganoxie are ready for the internet. To get an idea of how many people would be interested in internet services if The Mirror and Internet Direct were to bring it to the area, a questionnaire has been provided on page 3 of this issue of the Mirror.

Dale Breshears is pictured with his find of morel mushrooms. “They’re popping up and everyone thinks it’s too early for them.”

Helen Schilling reported that Ashley Bitler, the three-year-old daughter of Scott Bitler, went to work at her grandparent’s restaurant, Bitler’s, and was seen going around to booths to take orders. “How about some dessert, maybe a piece of pie,” she asked Helen. Helen’s grandmother, Joyce Bitler, told Helen that Ashley decided to clean up one of the big tables after the customers had gone. Ashley could not reach the middle of the table, so she climbed up on to the table to clean off the crumbs.

The former telephone office building on 4th street was torn down for a parking lot.

A bottle with a note tossed in the Kansas River off a bridge in Desoto in 1967 was found 250 miles away in New Haven, Missouri.

There was a small article in the Mirror that cautioned about rural buildings needing grounding systems to safe guard against lighting strikes.

Another new enterprise is taking shape on Fourth Street with several sites under consideration. This week it’s a retail milk pasteurizing plant which is planned by Junior Gress. The proposal is to handle 90 to 100 gallons of milk per day for our local citizens. Currently, most of our milk comes from bottling in Lawrence. This would employ Tonganoxie people and be a boon to our consumers.

Fall Leaf school was the site of an assault by Jack Coffman, 40 years old. It seems that Jack has accused pupils who attend the one room school house of having thrown rocks through the windows of his home. He took out his anger on Lorraine Bryant, Calvin Bryant and Miss Wilma Jeffries the school teacher whom he slashed with a wire whip and is now in the county jail with three charges. Seems like he might be in for some after school time at the chalkboard.

Western Association baseball teams will play opening night on Thursday May 2 at Veteran’s Field in Leavenworth. The St. Joseph Cardinals Club will come up to bat against the Leavenworth Braves. Time is 8:15 p.m.

Some interesting Tonganoxie lore tells of a giant walnut tree on Big Stranger that was exhibited at the World’s Fair in St. Louis. The rings indicated that it pre dated 1492, when Columbus sailed. It also was older than the Dutch Windmill built where the Jeanquart house now stands.

Tonganoxie has some famous citizens and visitors. General Pershing dined at the Myers House after World War I and cinema star Jean Harlowe’s grandmother ran a millinery shop on Fourth Street. Not to mention, the Wright Brothers of Kitty Hawk fame once lived on a farm on Big Stranger. Yes, we certainly have claim to fame. [editor’s note: Reuchlin Wright, brother to Wilbur and Orville lived in this area.]

The city council has named the week beginning May 2nd as clean-up week for Tonganoxie. The city will provide teams for hauling away trash and cans from the residence districts. As most business houses have their own conveyances, they will be required to do their own hauling. The city will not haul brush, but people will be required to burn it. The council deemed these rules necessary from previous experience on clean-up days. William Heynen, Mayor

County Commissioners Short and Roe and County Engineer Clark were in town last Monday closing up the land encroachment deals on the Fort to Fort road, which we understand was satisfactorily concluded.

Clark informed us that he has sent the estimates for cement surfacing for the section of the Fort to Fort road between Tonganoxie and Reno and also for the section composed of the half mile on Pleasant street, which will be a separate contract, to the State Engineer for approval and a date set for letting the bids .

This section between Tonganoxie and Reno is about four and three-fourths miles long, and will probably be let early this summer in time for completion before freezing weather next fall. In regard to the filling of the approaches to the two bridges east of town, Mr. Clark says he feels that the county has done all that can be expected of it, and it is up to the interested farmers and the Stranger Township trustees to make the fills.

Saturday afternoon a meeting was held in Laming’s hall by the subscribers to the creamery fund and a committee was appointed to draft a constitution and by-laws. The meeting then adjourned till Tuesday evening.

The committee carefully drafted the by-laws from a number of creameries in this state and made its report Tuesday evening. With but little alteration the report was adopted.

The name of the new organization is to be the Tonganoxie Cooperative Creamery Association. The capital stock is to be $5,000 divided into 100 shares of $50 each. The number of directors is to be seven, and the other officers are to be two auditors, president, vice president, treasurer, secretary and manager. The latter is to have charge of the butter making, but not of the finances of the institution. The business will be in control of the board of directors, but the secretary will have charge of making sales of butter, etc. No stockholder will be allowed to cast more than one vote. Directors will meet once a month, stockholders semi-annually or oftener if they see fit.

After the by-laws were adopted, it was decided by the meeting to elect four milk producers on the board of directors and three people from town. Ballots were taken and the following were chosen to serve on the board for the first year: W. Laming Jr., EQ Cox, DH Dreisbach, HV Needham, Geo. Wilkinson, Jonathan Winslow and Frank Fairchild.

The board is undoubtedly an exceptional one, for the men of which it is composed have had a good deal of experience in business and in milk producing and butter making, and will work together in harmony.