University of Kansas basketball coach Phog Allen holds the ball over new recruit Wilt Chamberlain’s head in an early practice after Chamberlain arrived at KU in 1955 as a freshman. Chamberlain scored 42 points in his freshman opener against the KU varsity.

A basketball story that appeared on Jan. 27, 1921, in The Mirror showed that the “first and second girls teams of the home school” played against Basehor and then the THS boys team played Lansing. After a slow start, THS came back and then went on to victory. 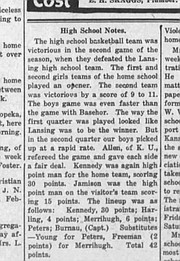 A story published in January 1921 in The Mirror showed that "Allen" from KU officiated a game between Tonganoxie and Lansing.

It appears that the referee that night quite possibly was legendary University of Kansas coach Phog Allen.

As the story read, “Allen, of KU, refereed the game and gave each side a fair deal.”

Jeff Hughes, a 2007 Tonganoxie High School graduate, has been researching local sports history and working to assemble year-by-year scores for area leagues in multiple sports. While researching he uncovered this story with the interesting tidbit about the referee. He said there weren’t any other Allens listed on the KU roster in 1921, so it would appear that the coach who led KU to a national championship and helped the United States to Olympic gold that same year in 1952 as an assistant also did some officiating. He began coaching at KU in 1919.

Hughes noted that, through his findings, he’s also found that KU basketball players helped coach at Tognanoxie during the 1910s.

As for the present-day THS squad, the Chieftains will look to finish off the best season in decades against the Lions on the road in a battle of former Kaw Valley League members.

The two Leavenworth County schools were league foes for several years, but Tonganoxie began play in the Frontier League in fall 2018. Lansing and fellow former KVL schools Basehor-Linwood and Turner joined with De Soto, Leavenworth and Shawnee Heights to form the six-member United Kansas Conference at the same time.

Tonganoxie and Lansing used to play often, as the KVL members had home-and-home match ups on many occasions. Lansing also played in the Tonganoxie Invitational, so the two schools played each other three times in a season in some instances. They also played each other in a 2002 substate at Hiawatha in which THS upset Lansing and then advanced to the substate finals. Tonganoxie lost to Atchison in the championship, as the Chieftains fell one victory short of a state bid.

Lansing has won 15 in a row in the series dating back to 2010-11. THS won two in a row before that, but overall the Lions have won 21 of the last 24 in the series. Lansing won a 5A state title in the middle of that latest winning streak. LHS finished a perfect 25-0 in that state title year of 2014.

Though the longtime arch-rivals haven’t faced off in three years, there were longer gaps for other Kansas teams this year. Though the original 2020-21 schedule had the two teams playing each other at the end of the season, the COVID-19 pandemic has left teams scrambling to find new opponents when quarantines canceled originally scheduled contests. The THS girls, for instance, picked up a game against a new foe in Burlingame this past weekend. The Bearcats compete in the Lyon County League. Burlingame is in Osage County southwest of Topeka.

As for two teams that hadn’t met in a few years, Concordia and Clifton-Clyde, which both are in Cloud County, played last week. Teams from Concordia hadn’t played teams from Clifton or Clyde (the two schools consolidated in 1980) since 1929 when boys teams played. Concordia has competed in 4A for years, while CCHS is a 1A program. It was the first girls meeting between the two schools last week. Clifton-Clyde swept the games at Concordia.