Paul Coker appeared in a Journal-World article on Dec 25, 1962, while visiting his parents in Lawrence. The Lawrence native drew the Larwence High Chesty Lion mascot, which still is used today.

A Lawrence native who became a giant in the animation and cartooning field has died.

Paul Coker, Jr. died in Santa Fe, New Mexico at the age of 93, according to a statement released by his family on Friday.

Coker was born in Lawrence in 1929 and studied drawing and painting at the University of Kansas before becoming well known in the world of animation for works ranging from holiday classics to pieces in Mad Magazine. 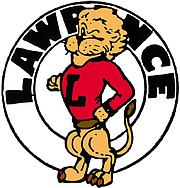 For Mad magazine, Coker — who began working with the publication in 1961 — was well known for the “Horrifying Cliches” feature and also illustrated many of the magazines parodies of popular movies or TV shows, Deadline reported.

Locally, Lawrence residents continue to see Coker’s work on a regular basis. He is credited with drawing Chesty the Lion, which is the mascot of Lawrence High School. While the school had used a Lion as a mascot for decades, several histories of LHS report that it was Coker in 1946 who drew the Chesty the Lion mascot that is still used today.

After studying at KU, Coker went to work at Kansas City’s Hallmark Cards as a greeting card designer. He continued to be associated with Hallmark for decades, Deadline reported.

He is survived by a wife of 33 years, Rosemary Smithson, and stepdaughters Lee Smithson Burd and Carol Smithson, according to Deadline.