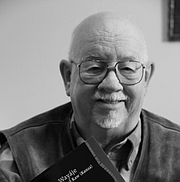 Professor Robert L. Rankin passed away on February 24, 2014 at the age of 75. For many years he had endured both prostate cancer and kidney dialysis. His final days were peacefully spent in St. Luke’s Hospice Care in Kansas City, MO.
Robert was born January 17, 1939 in Bellefonte, PA, the son of Harvey and Helen Rankin. Most all of his childhood was spent in Tifton, GA, where he pioneered the Tifton chapter of the Ground Observer Corps in the mid 1950’s. He was also active in the Boy Scouts and became an active amateur radio operator. Robert had continued his interest in ham radio until his death, most recently serving as a tornado storm spotter for Leavenworth County Emergency Preparedness.
He graduated from Tifton High School in 1956, then attended Emory University where he majored in Romance Languages and obtained his B.A. in 1960. He earned an M.A. (1968) and Ph.D. (1972) from the University of Chicago in Linguistics.
He married Carolyn Ann Leverance on September 11, 1965 in Chicago, IL. The following year Robert applied for and obtained a Fulbright Fellowship for study in Romania. He and his wife spent two years in Romania (mid 1966 to mid 1968) where Robert researched Romanian dialects, examining regional linguistic differences such as pronunciation and grammar. His Master’s thesis was finished in 1968 on his return to the U.S.
In 1969, Robert came to the University of Kansas Linguistics department as an Acting Assistant Professor of Linguistics. In 1972, upon completion of his doctoral dissertation, he obtained his Ph.D. and became an Assistant Professor of Linguistics at KU. As the years passed he rose from assistant, to associate and finally to professor in 1986. In the meantime his research interest had turned to Native American languages due to encouragement he received from fellow linguists at KU. It all started when he taught a field methods course during the summer of 1972 in which the grammar of a language unknown to the students was deciphered. Two Haskell students (speakers of Choctaw) were recruited and Robert became fascinated with the language. That was the start of his American Indian language work. He worked with Quapaw in early 1973, and soon after, when there were no more speakers left, he moved on to the Kansa language. There were four fluent speakers of Kansa when Robert started his research in 1973 and 1974. He continued to work with the Kansa language even after his retirement from KU in 2005. His latest contribution was as contributing editor for the Annotated Dictionary of Kaw (Kanza), published in 2012 by the Kanza Language Project of the Kaw Nation, Kaw City, OK.
Robert is survived by his wife, Carolyn, of Tonganoxie, KS, and his younger brother Jim of Concord, CA. The family suggests memorials in his name to the American Indian College Fund at 8333 Greenwood Blvd. Denver, CO 80221; or online: www.collegefund.org.
A Memorial Gathering will be held at the University of Kansas Union on Tuesday, March 11 from 1:00 to 3:00 PM in the English room (6th floor).
Please sign this guestbook at Obituaries.LJWorld.com.