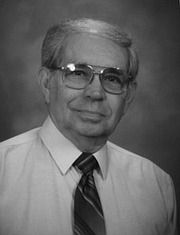 Services for Clarence E. “Gene” Botts who died on Dec. 9, 2014, will be held at l0:30 a.m., January 9, 2015, at Warren McElwain Mortuary in Lawrence, KS. Family members will greet visitors following the ceremony. Inurnment with military honors will follow at 2:30 that afternoon at Hubbel Hill Cemetery in Tonganoxie, KS.
Gene was born on May 10, 1930 in Tonganoxie, KS to Alta May Niebaum Botts and William Glen Botts. He graduated from Tonganoxie Rural High School in 1948 and later earned an Associate of Arts degree from Alan Hancock College. Following high school graduation, Gene moved to Chicago where he worked with his father in the field of auto mechanics. In 195l, Gene joined the U. S. Air Force. He was an instrumentation and automatic pilot technician for several years until he was based at Vandenberg Air Force Base in Lompoc, CA and ultimately worked as a missile instrument supervisor. He retired in 1977 with the rank of Msgt. After retirement from the military, Gene remained on base and worked another 15 years for ITT Corporation in the field of missile instrumentation, retiring in 1994.
In 2006 Gene and his wife Colene moved from Lompoc, CA to Lawrence, KS. Gene was a member of First United Methodist Church, American Legion, Tonganoxie VFW and many service related organizations. He enjoyed traveling, reading, participating in community education classes through the university, attending theater events and following the activities of great-grandchildren and other relatives in the area.
Gene was preceded in death by his parents, a brother Keith Alan, and his wife Mary Sue Botts. He is survived by his wife Colene Slawson DeHoff of the home, his son Dennis (Rebecca) of Huntsville, AL and daughters Denise (Joe) Dobbs and Deana (Billy) Grace of McKinney, TX. He is also survived by his stepsons Harold (Rhonda) Anderson of Lompoc, CA, Bill DeHoff (Ginger) of Lenexa, KS, and four stepdaughters Sharon (Dave) Scherer of St. Joseph, MI, Louise White of Tonopah, AZ, Pamela Anderson of Williamsburg, W.VA and Susan (Larry) Andrews of Lawrence, KS, grandsons Chase and Blake Dobbs and David and Dylan Grace, granddaughter Nicole Edwards and great-grandchildren Tanner and Reese Edwards, 12 step-grandchildren and 19 step-great-grandchildren and many members of his extended family.
In lieu of flowers memorials contributions may be made in the name of Lawrence Memorial Hospital Endowment Association in care of the mortuary.
Online condolences may be sent to www.warrenmcelwain.com.
Please sign this guestbook at Obituaries.LJWorld.com.