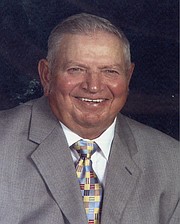 Kenneth Glenn “Joe” Neff, 84, passed away peacefully in his sleep on Sunday, March 1, 2015 at his home in Tonganoxie, Kansas with his beloved wife, Cathryn, nearby.
Visitation will be from noon-2:00 p.m., Thursday, March 5th with funeral services to follow at 2:00 p.m. all at Chapel Hill – Butler Funeral Home, 701 N. 94th St., Kansas City, Kansas. Interment with Honors will follow in Chapel Hill Memorial Gardens.
Joe was born September 22, 1930 to Andy Berry and Stella Alice (Murphy) Neff in Kansas City, Kansas. He graduated from Wyandotte High School. Joe served as a Sergeant with the Kansas Army National Guard during the 1950s.
Joe spent virtually his entire professional career with B.C. Christopher and Company where he was a general partner, served in the grain elevator department, and was a licensed securities broker and grain merchandiser. He retired in 1985.
Joe married Cathryn Marie Comstock on May 25, 1957 at Stony Point Christian Church in Kansas City, Kansas, where Joe was a deacon for many years and served for several years on the board of directors of Stony Point School. Joe and Cathryn lived in Kansas City, Kansas until 1971, when they bought a house and acreage near Tonganoxie, Kansas. Together the couple transformed the home and property into a beautiful farm where they raised beef cattle and grew a large garden. They enjoyed traveling together and visiting with family and friends. Joe also enjoyed hunting and fishing with his sons, watching and learning about wildlife, and spending time with his dog, Buddy.
Joe is preceded in death by his parents and by his brother, Carl Edwin Neff. He is survived by his wife, Cathryn Neff, of the home, his son, David Neff (wife Kristi) of Baltimore, Maryland, his daughter, Deborah Wade (husband Don) of Memphis Tennessee, his daughter, Mary Ann Hayden (husband Dave) who was caring for Joe in Tonganoxie at the time of his death, and his son Christopher Neff (wife Suzanne) of Katy, Texas.
He also is survived by seven grandchildren, Andrew Neff, Daniel Neff, Stephen Wade, Matthew Wade, Jonathan Wade, Joseph Hayden, Stephanie Neff, and David Neff, and by many nieces and nephews.
Anyone wishing to honor Joe’s memory is invited to make a contribution in his name to either The Salvation Army of Kansas and Western Missouri at 3637 Broadway, Kansas City, Missouri 64111, or The Jayhawk Audubon Society, P.O. Box 3741, Lawrence, Kansas 66046.
Arrangements are under the direction of Chapel Hill – Butler Funeral Home, 913-334-3366.
Please sign this guestbook at Obituaries.LJWorld.com