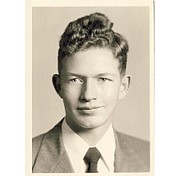 Dr. Byron Eugene Denholm, 84, born in Tonganoxie, KS in 1932, passed away in Hemet, CA on September 6, 2016. He is survived by two adult children and a granddaughter. Dr. Denholm was appointed to the California State Board of Veterinary Examiners by Governor Ronald Reagan and served as its’ President in 1972. Byron later served on the National Board of Veterinary Medical Examiners and taught at his Alma Mater of Kansas State University. A private family ceremony will be held at a later date.