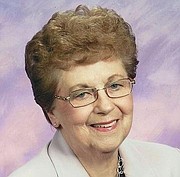 Fern Helena Braksick, 91, of McLouth died Thursday, May 25, 2017 at her home. She was born June 6, 1925 on the family farm at Napoleon, MO, the daughter of Julius Ernest and Emma Johanna Wildschuetz Laumeier. Fern graduated in 1943 from High School in Wellington, MO. She served as the Vice President and Manager for the Bank of McLouth from 1962 until her retirement in 2013. She was a member of the McLouth United Methodist Church and was the church organist for 50 years. She also belonged to the All Sew Club of McLouth. Fern married Stanley William Braksick on June 21, 1947 at Napoleon, MO. He preceded her in death on February 1, 2006. Survivors include a Daughter, Kathy (Ron) Scott and Daughter­In­ Law, Candy Braksick, all of McLouth, a twin Sister, Fay Tilly, Higginsville, MO, four Grandchildren, Jennifer Ping, Sonja (Jarrell) Snowbarger, Staci (Ken) Cook and Sherri Braksick, M.D. and six Great­Grandchildren, MaKenna Snowbarger, Brakson Ping, Gracya Snowbarger, Sumner Ping, Asher Cook and Isaac Cook. She was preceded by a Son, Robert “Bob” Braksick and three Sisters, Alice Soendker, Viola Niendick and Ruth Dieckmann. Funeral Services will be 10:00 AM, Thursday, June 1, 2017 at the McLouth United Methodist Church. Burial will follow at the McLouth Cemetery. Visitation will be Wednesday 5:00 to 8:00 PM at the church. Memorial contributions may be made to the McLouth UMC or Jefferson County Friends of Hospice and sent in care of Barnett Family Funeral Home, PO Box 602, Oskaloosa, KS 66066. Online condolences may be made at www.barnettfamilyfh.com