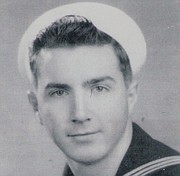 Waldean Moore (Dean or Wally), beloved husband, father, grandfather, and great-grandfather passed away August 22, 2019, at the age of 87. Dean was born in Harold, Kentucky, on July 29, 1932. As a child he moved to Braeholm, West Virginia. As a son of a coal miner he lived in many mining towns, but ended up in Accoville, WV where he graduated from Man High School in 1950 and then joined the Navy. He proudly served for four years as an airplane mechanic on the Martin P5 Marlin, an amphibious plane that protected our coasts by searching for Soviet submarines.
Dean met the love of his life, Janet Gayle Gearheart Moore, as a child. When she first met him, Janet told her sister that she was going to marry that boy someday, and she did. They were married for 65 years. They moved their growing family to the Kansas City area in 1959. The family moved to Tonganoxie, Kansas, in 1974. Dean worked at Sealright Company for 40 years until it closed its doors and he was forced to retire. Not able to sit at home, he started a second career working at B&J Convenience Store in Tonganoxie for 13 years until it closed its doors. He always joked he couldn’t keep a job.
Dean was preceded in death by his parents, Hillard and Marie Moore, siblings, Colleen and Hillard, Jr., his grandson, Clint Gorman, and the son of his heart, Chris Smith. He is survived by his wife, Janet, his children; Karen & Russell Walters, Nona & Rob Gorman, Deana & Hank Miller, and Bryan & Laura Moore, his grandchildren and great-grandchildren, Justin & Shana Walters, Jared & Kami Walters, (George & Carter), Jana & Jason Petty (Kaylee), Robyn & Travis Powell (Ellie & Laurelin), Jillian Miller, Jake & Jess Miller, Alex Moore, and Lilly Moore, and the children and grandchildren of his heart Tella Smith, Trevor & Rebekah Smith and family, Brandon & Amber Smith and family, Kelly Smith, and Kay Nasseri and family. Visitation will be 3 p.m. to 4:30 p.m. Sunday, August 25, 2019 at the Amos Family Funeral Home in Shawnee. A celebration of Waldean’s life will follow at 4:30 p.m. at the funeral home. Waldean will be laid to rest in a private family service at Leavenworth National Cemetery. In lieu of flowers the family requests donations to the Heart of America chapter of the Cystic Fibrosis Foundation, 2405 Grand Blvd; STE 520 Kansas City Mo 64108 or, the American Diabetes Association, 10580 Barkley, Suite 400, Overland Park, KS, 66212.
Dean loved his cat Max, his Diet Coke, his cookies, KU basketball, KC Royals, coin collecting, and Back Alley Bridge, but most of all he loved his family. He was an honorable man who will be sorely missed. “Until we meet again.”