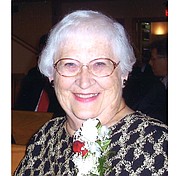 Memorial services for Martha Lucille Courtwright, 88, Lawrence were held at 2:00 p.m. Thursday, October 3, 2019, Warren-McElwain Mortuary in Lawrence. Inurnment will be held at a later date in Mt. Calvary Cemetery in Lawrence. Martha passed away Friday, September 27, 2019 at Stormont Vail Hospital in Topeka, KS.
Martha was born August 8, 1931 in Chicago, IL, the daughter of William Peter and Cecelia (Cierocke) Streit. She attended the Saint Josaphat School Commercial Department where she completed a two-year course of study preparing her for the exciting world of office work. She had a brief but rewarding career working for the Milwaukee Railroad before being swept off her feet by Leonard Courtwright. Leonard proposed by hiding a ring inside a boxed stationery set and presenting it to Martha on Valentine’s Day. The couple married on October 19, 1957, in Chicago, Illinois. They were joined by their first born, Glenn, on October 17, 1958. Glenn was very colicky, so everyone was surprised when they decided to take a chance on a second child. Gail was born August 27th, 1963. She was such an easy child that they celebrated robustly, resulting in their final child, Gloria, who was born January 26, 1967.
Leonard and Martha spent most of their married years in Tonganoxie, Kansas, where they raised their family on a hobby farm. While Leonard worked all the hours God gave at Colgate Palmolive in Kansas City, Martha worked as a custodial engineer for the Tonganoxie Middle School. She was loved and respected by all who knew her, teachers and students alike. Martha was known for her thoughtfulness, sense of humor and love of baking. Her Whoopie Pies were her most requested treat. Martha loved spending time with friends and family and traveling. After retirement, she enjoyed several trips to England, Scotland, Wales and Ireland. More recently, she enjoyed long drives through the Kansas countryside, taking in the pastoral views. She was a member of the Sacred Heart Catholic Church in Tonganoxie, KS.
Martha left us peacefully, with her family by her side. Their hearts are broken, but a heart that is a broken is a heart well-loved. Martha treasured her family and friends. You know who you are, and we know you will miss her. Martha is survived by her husband Leonard, of the home. Other survivors include her daughters, Gail Courtwright, Gloria Courtwright Grazia (Todd Grazia); son, Glenn Courtwright; and three grandchildren, Richard Courtwright, Sara Courtwright, and Aidan Schaplowsky. She was preceded in death by her sister, Elaine.
Memorial contributions may be made in her name to the Breast Cancer Center at Lawrence Memorial Hospital and may be sent in care of Warren-McElwain Mortuary, 120 W. 13th Street, Lawrence, KS 66044. For more information or to post a condolence, please go to warrenmcelwain.com.