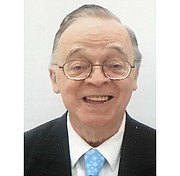 A Celebration of Life will be held for Mr. Robert B. Elder at Trinity Lutheran Church in Lawrence, Kansas on October 29, 2019. Mr. Elder passed away peacefully on 09/02/2019 while working on the family farm near Baldwin City, Kansas.
Mr. Elder was born in Pleasant Hill (now Deerwalk), in Ritchie County, West Virginia on May 17, 1939. After graduating from Harrisville (WV) High School in 1958, he worked in the oilfields of West Virginia before joining the Army. He then returned to West Virginia before enlisting in the Air Force. During his service in the Air Force, he was stationed at Wattisham Radar Site, Suffolk, England, where he maintained airtoground communications equipment.
While in England, he met his future wife Jan Cobb. Following their marriage, Mr. Elder was transferred to Eglin Air Force Base, Florida. After returning to civilian life in 1968, the couple settled in Lawrence, Kansas. Mr. Elder served as an electrician for the City of Lawrence for several years before retiring to his beloved farm in rural Douglas County, Kansas. In retirement, he enjoyed playing tuba in the New Horizons Band in Lawrence, Kansas.
Mr. Elder was buried at the IOOF Cemetery in Harrisville,West Virginia. Survivors include Ms. Jan Elder, daughter Mary Van Scoyk and husband Marshall of Viborg, South Dakota, son Robert Elder of Fredericksburg, Texas, sister Loretta Wilson of Ellenboro, West Virginia, and brother Raymond Elder and wife Joyce of Robbins, Tennessee.
The family will receive guests at Trinity Lutheran Church at 3:00 PM, with the service to follow at 4:00.