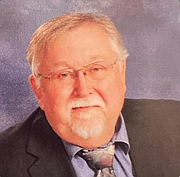 Donald “Don” Robert Heim, 73, of Sabetha, Kansas died on Tuesday, November 30, 2021 at the Apostolic Christian Home in Sabetha. Don was born on March 11, 1948 in Leavenworth, Kansas, the son of Cloyd E. and Mary Alice (Hund) Heim. He grew up on a farm in Leavenworth County. He loved to farm and raise cattle but was not fond of hogs. Growing up, he was active in the Leavenworth County 4-H. He attended schools in Leavenworth and received his Bachelor of Economics from Benedictine College in Atchison, Kansas. He started his career at the grain elevator in Leavenworth, and also, worked for grain elevators in Wellington and Ashland, Kansas. In addition, he worked for Windmill Repair in Ashland. Then, he operated the Emery Feed Store and worked for Bill McGraw Fertilizer in Tonganoxie, Kansas. Don married Gerrianne (Nobles Cook) Heim on October 6, 1984 at the Trinity Lutheran Church in Leavenworth. In 1998, Don and Gerrianne moved to Sabetha where he worked at the Sabetha Farmers Coop until his retirement in 2010. Don enjoyed his involvement and served in several capacities on the St. Joseph’s Catholic Church Parish Council in Leavenworth, the Leavenworth County 4-H Council, and the Sabetha Lions Club. He was a member of the Sacred Heart Catholic Church in Sabetha. Don was preceded in death by his parents; a sister, Helen Stewart; a brother, John E. Heim; two sister-in-law’s, Carol Heim and Rita Heim; two brother-in-law’s, James L. Stewart and Edmund Theis; and a grandson, Isiah Creek. Don is survived by his wife, Gerrianne of Sabetha; a son Jonathan (April) Heim of Raytown, Missouri; a step-daughter Melanie Cook Creek of Kansas City, Missouri; a step-son, Roger Cook of Leavenworth; a sister, Alice L. Theis of Leavenworth; a brother, Cloyd Eugene Heim II of Leavenworth; two brother-in-law’s Wilson (Val) Cohoon of Bellbrook, Ohio and Darel (Sharon) Cohoon of Huntington Beach, California; eight grandchildren; six great-grandchildren; many nieces, nephews, and cousins in the Leavenworth area; and many friends. A Mass of Christian Burial will be celebrated on Monday December 6, 2021 at 10:00 a.m. at the Sacred Heart Catholic Church in Sabetha, Kansas. Visitation will be held from 9:00 a.m. to service time at the church. Interment will be made at the Mt. Calvary Cemetery in Lansing, Kansas. Memorial contributions may be made to the National Multiple Sclerosis Society, Sacred Heart Catholic Church of Sabetha, and St. Joseph Catholic Church in Leavenworth sent in care of Popkess Mortuary, 823 Virginia Street, Sabetha, Kansas 66534. Online condolences can be left for the family at www.popkessmortuaries.com