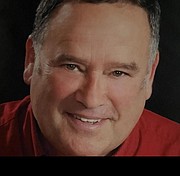 Arthur W. “Rocky” Himpel, 69, of Tonganoxie, formerly of Oskaloosa, died Sunday, July 17, 2022 at St. John Hospital in Leavenworth. He was born September 4, 1952 at Lawrence, the son of John Francis "Jack”, Sr. and Margie Lois Colburn Himpel. He was raised in Tonganoxie and was a 1970 graduate of
Tonganoxie High School, after graduation he served two years in the U.S. Air National Guard. He worked 37 years for Century Building Solutions Supply from 1977 until retiring in 2014.

After retirement, he worked three years at Orscheln’s in Basehor. A long life of service, Rocky serves as a Tonganoxie City Councilman and is a member of the Leavenworth County Planning and Zoning Board and Leavenworth County Development Council. He formerly served as the Mayor and a City Councilman of
Oskaloosa for many years. He was a member of Oskaloosa American Legion Post 36.