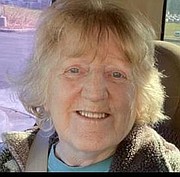 Judith Ann “Judy” Daniels, 77, of rural Tonganoxie, died Thursday, July 21, 2022 at her with her family at her side. “Judy” was born November 10, 1944 at Kingsville, TX, the daughter of Ralph Milton and Oleta DeeVee Loyd Bogard. She was a 1961 graduate of Washington High School in Kansas City, KS. She was a graduate of Kansas City Kansas Community College School of Nursing earning her LPN license. She also attended Cosmetology School in Kansas City, KS. After working as a Nurse for many years, she served as a transportation driver for the Leavenworth Area Council on Aging.

Cremation Care is planned. Grave Side Inurnment Service will be at 11:00AM, Saturday, September 3, 2022 at McLouth Cemetery. Memorials suggested to Elara Hospice, Meals on Wheels, or to Leavenworth Animal Shelter in care of Barnett Family Funeral Home, P.O. Box 602, Oskaloosa, KS, 66066. barnettfamilyfh.com