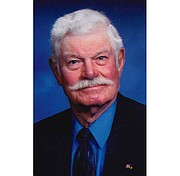 Arthur Calvin Miller went to be with his Lord on May 15, 2022 at Meyer Care Center in Higginsville, Missouri, at the age of 94. He was born June 3, 1927 to Charles Frederick Miller and Gladys Ida Miller in Devon, Kansas. He is survived by his wife Helene of the home; daughter, Wonedith Miller of Brownstown, Michigan; sister, Esther Anderson of Tuttle, Oklahoma; stepson, Jonathan Hatcher of Devils Lake, North Dakota; five grandchildren and seven great-grandchildren. He was preceded in death by his parents; brothers, Delbert, Louis and Joe Miller; sister, Forestine Hoover; and sons, Charles and Dean Miller.

Art retired from General Motors in 1993 where he worked both in Detroit, Michigan and the Fairfax Plant in Kansas City, Kansas. He was a Millwright in skilled trades. He finished high school in Blue Mound, Kansas and attended trade schools in St. Louis, MO and Windsor, Canada. He could fix anything for which his family was always grateful!

Art was a Mason with a membership in the Rising Sun Lodge, Ft. Scott, KS for 70 years. He was a Shriner with Abdallah Temple, Overland Park, KS for 40 years. He was a World War II veteran serving in Germany and was part of the Greatest Generation. He was a life member of Veterans of Foreign Wars with a membership in Post 9271, Tonganoxie, KS. He served as Commander of that Post during the time the building was built. He was also a Life member of the American Legion, Post 14, Lawrence, KS.

Art loved working with those groups and did everything he could to contribute, from selling Vidalia Onions on the street corner in Tonganoxie for the Shriners, to flipping pancakes at the American Legion’s annual pancake breakfast in Lawrence.

He enjoyed gardening and shared his garden with neighbors and friends. He was also a very good dancer! He loved all kinds of dances and could Polka or Waltz his way around any dance floor.

Sunday mornings found him in early services at Tonganoxie Christian Church where he did everything from greeting folks as they came in, to repairing chairs, assisting an Eagle Scout in the church with his project of building a base and flag pole for the church, and where his willingness to help wherever he could was evident. Art’s gentle spirit showed every day in his care of his family and his helpfulness to others. He will be greatly missed!

A graveside service with military honors will be held in the Ft. Scott National Cemetery, Ft. Scott, KS on June 7, 2022 at 1:30PM. Memorials can be made out to Preferred Hospice, c/o Stewart-Hoefer Funeral Home 1600 Main St. Higginsville, MO 64037. Online condolences may be made to the family at www.stewarthoeferfuneralhome.com.