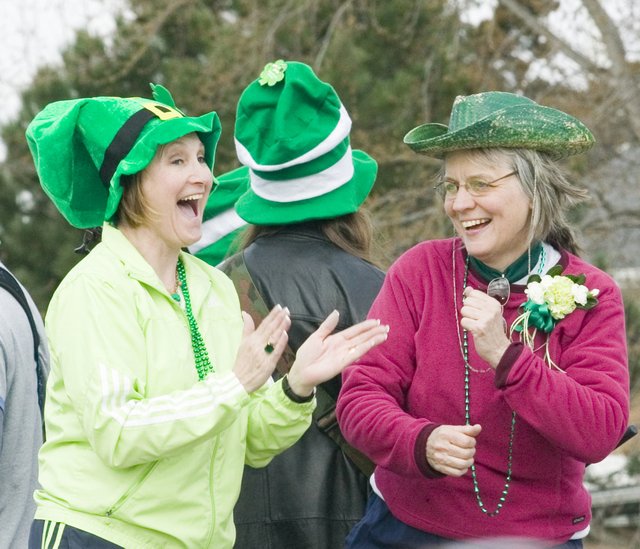 Debbie Breuer, left, and Kay Soetaert, ride on the back of the County Road 5 Band's float. Breuer and Soetaert helped organize the St. Patrick's Day Parade.

Come and celebrate the luck of the Irish. This year’s St. Patrick’s Parade — the 31st installment of the annual event — will start at 11 a.m. March 16 in downtown Tonganoxie. T-shirts will be on sale at various locations that will be announced in the coming weeks.

Tonganoxie eyes of all shades will be smiling Saturday. The community’s St. Patrick’s Parade returns with an 11 a.m. start time. The parade will take the traditional downtown route, starting at Main and Fourth streets and moving west along Fourth Street. A traveling trophy will be given out for the best overall float, while bobble head trophies will be given for the best boys and girls youth entries.

The 27th annual Tonganoxie St. Patrick’s Parade is Saturday morning in Tonganoxie and organizers hope more categories — and prizes — will help to build up participation in the parade. The parade will begin at 10 a.m. March 14 and start at Fourth and Main streets and run west through downtown Tonganoxie.

Irish eyes likely will be smiling big Saturday in Tonganoxie.

Two trucks, a bullhorn and some crepe paper.

Irish eyes to smile on Tonganoxie

Area residents would be best served to bust out a bit o' green March 15 in downtown Tonganoxie.