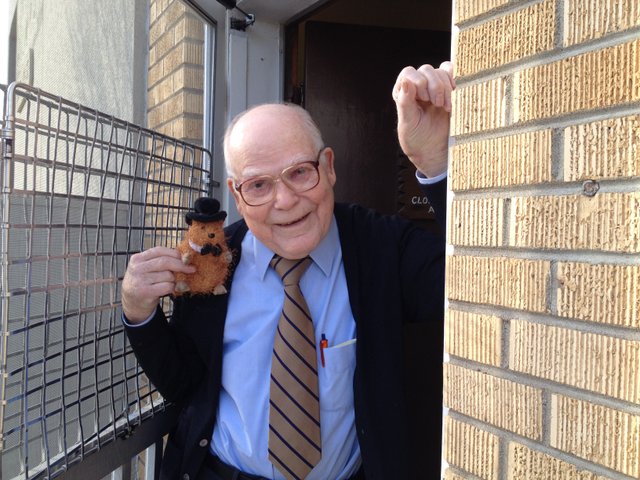 Tonganoxie Phil (Dr. Phil Stevens) could see his shadow Monday afternoon, but the day before — Groundhog Day 2014 — the local weather prognosticator didn't see his shadow. And thus, an early spring should be on its way.

Tonganoxie Phil: Remembering the weather prognosticator with every Groundhog Day story written about him

In what could be a foreshadowing of sorts — without the shadow — the area might be in for an early spring. After all, today is Groundhog Day, and with an overnight rain shower reminiscent of springtime precipitation, it could be a sign.

Steve Denny finished playing a song on his bagpipe, the boisterous sound from the instrument still resonating through Quisenberry Funeral Home. “Could you hear it?” Denny jokingly asked Betty Stevens. “Was it loud enough?” Dr. Philip Lindbergh Stevens had mentioned on several occasions he wanted bagpipes as part of his funeral arrangements.

Wisconsin is known for its badgers, but another type of furry fella made the headlines there Monday. Sun Prairie, Wis., Mayor Jonathan Freund leaned over to Jimmy the groundhog during a Groundhog Day ceremony to get the scoop on the rodent’s prognostication.

Tonganoxie Phil: Early spring is on its way

Longtime physician by day, weather prognosticator by morning. Dr. Phil Stevens has been practicing medicine at the same office in downtown Tonganoxie for more than 58 years.