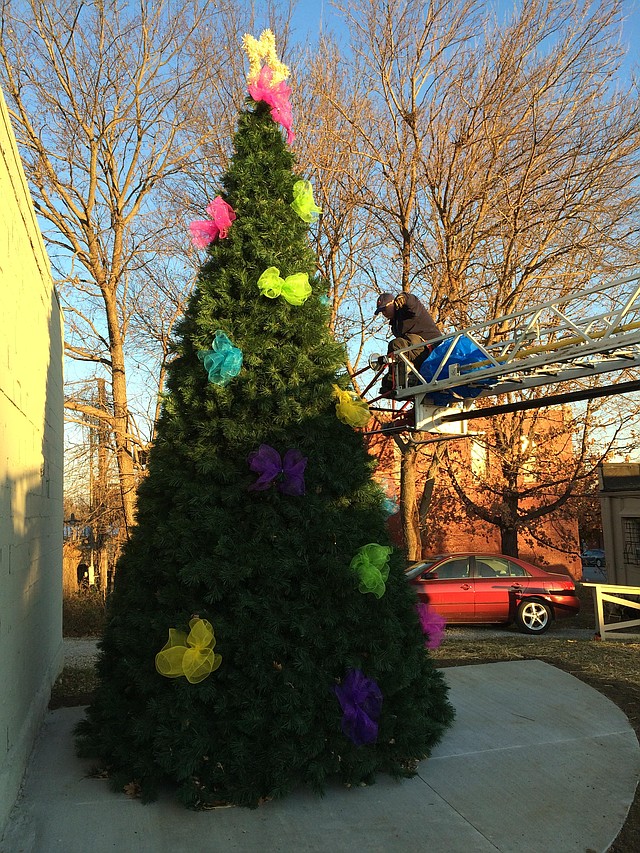 The Tonganoxie City Fire Department decorates the city's Christmas tree Wednesday in the pocket park where the police department previously stood. The tree officially will be lit up for the first time Saturday as part of the the Mayor's Christmas Tree ceremony.

Downtown Tonganoxie soon will be getting festive for the holiday season and also denoting work on a new landmark. The Mayor’s Christmas Tree Lighting festivities will start about 5:30 p.m. Saturday at the downtown pocket park, Fourth and Delaware streets. At 5:35 p.m., there will be a THS Jazz Band performance. At 6 p.m., there will be a children’s choir performance. Santa and Mayor Jason Ward will arrive about 6:30 p.m. before Ward reads “Twas the Night Before Christmas.” The tree lighting then is planned to happen at 6:40 p.m.

Downtown Tonganoxie will be the place to be for a festive Saturday. The annual Mayor’s Christmas Tree Lighting will take place 4-6 p.m. along Fourth Street. Musical performances, carriage rides, a DJ, food, youth activities and more are planned for this year’s event. The City Council Chambers, 321 Delaware, again will be transformed into a winter wonderland, as Santa will make a visit for children eager to see Kris Kringle and get their photos taken with the jolly elf.

Tonganoxie Mayor Jason Ward hopes weather will cooperate for Saturday’s holiday festivities. The Mayor’s Christmas Tree Lighting is set for 3-6 p.m. that day in downtown Tonganoxie. Carriage rides will be offered for visitors attending the event, while vocalists from Tonganoxie elementary, middle and high schools will perform throughout the event. A DJ also will perform musical entertainment. Fourth and Delaware streets will be the hub of the event.

Festivities will include snow machine inside downtown business, new locale for tree

A cold spell has cast its bone-chilling temperatures on the area, but temperatures are supposed to reach the low 50s Saturday, just in time for the Mayor’s Christmas Tree Lighting ceremony and festivities.