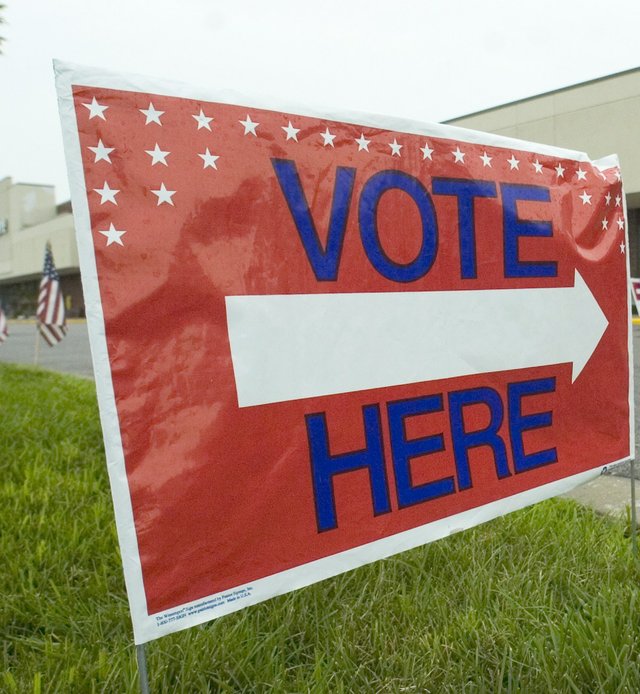 The primary for the 2020 election is next week. Primaries are Tuesday, with polling sites set to be open 7 a.m.-7 p.m. that day. Local voters also can utilize advance ballot voting by making an appointment at the Leavenworth County Courthouse with the office of County Clerk Janet Klasinski at 913-684-0421.

The primary for the 2020 election is almost here. Primaries are Aug. 4, with polling sites set to be open 7 a.m.-7 p.m. that day. Local voters also can utilize advance ballot voting by making an appointment at the Leavenworth County Courthouse with the office of County Clerk Janet Klasinski at 913-684-0421.

Local elections for city council and school board are drawing closer. The election is Nov. 5 For the City Council races, the two incumbents will run to remain on the governing body. Curtis Oroke is seeking a second term, while Lisa Patterson will seek a full term. Patterson was appointed earlier this year to take over Kara Reed’s seat, as the former council member stepped down with her move out of city limits. This year’s council race has two challengers with experience on a municipal board. Jake Dale and Zachary Stoltenberg both currently serve on the Tonganoxie Planning Commission board.

Voters will have a chance to interact with candidates before the general election Saturday morning at the Tonganoxie VFW 9271 Post Home, 910 E. First St. Republican incumbent Willie Dove and Democratic challenger Stuart Sweeney in the 38th District race and Republican incumbent Jim Karleskint and Democratic challenger Thea Perry in the 42nd District race will be on hand. Any other candidates running for office are also welcome to speak at the event, which will run 9-10:30 a.m. First State Bank and Trust and Tonganoxie VFW Post 9271 are co-sponsoring the event.

Election Day about a month away

Voters will have plenty of races and an initiative to decide in about a month. Election Day is Nov. 6, with polls open 7 a.m.-7 p.m., though advance voting also is an option. Voter registration still is open, but residents have until next Tuesday. Tonganoxie Public Library offers assistance for anyone needing to register to vote. More information also is available at voteks.org or rockthevote.org. This is a much-anticipated midterm election at the federal level.

As the state waits to find out a winner in the Republican pimrary race for governor between Gov. Colyer and Secretary of State Kris Kobach, many other races were set after last week’s election Aug. 7. State Reps. Jim Karleskint, R-Tonganoxie, and Willie Dove, R-Bonner Springs, held off challengers Lance Neelly and Noel Hull in the 42nd and 38th districts, respecitvcely. Laura Kelly breezed her way to a Democratic primary victory in the governor’s race, as did Debbie Deere in another Democratic primary — state representative in the 40th District.

Tuesday will decide several primaries across the state, including a hotly contested governor’s race. Some races are not contested in the primaries, but there are many vying to represent a specific party heading into November. Here’s the list of candidates for that most contested race — governor — for both Democrats and Republicans is for governor. Incumbent Jeff Colyer, Overland Park, faces Kris Kobach, Lecompton; Patrick Kucera, Overland Park; Tyler Ruzich, Prairie Village; Ken Selzer, Leawood; Joseph Tutera Jr., Mission Hills; and Jim Barnett, Topeka, in the primaries. Colyer formerly was lieutenant governor, but was sworn in to fill the rest of former Gov. Sam Brownback’s unexpired term after President Donald Trump appointed Brownback ambassador for international religious freedom. For the Democrats, there are five candidates running in the primaries: Carl Brewer, Wichita; Laura Kelly, Topeka; Joshua Svaty, Topeka; Arden Andersen, Olathe; and Jack Bergeson, Wichita.

The Tonganoxie City Council will have three new faces. With all precincts reporting, Jamie Lawson (409), Loralee Stevens (325) and Rocky Himpel (247) were the top three vote-getters Tuesday. Incumbent Jim Truesdell did not advance out of the August primaries. And on Tuesday, fellow incumbents Chris Donnelly and Andy Gilner also were defeated.

The Tonganoxie City Council will have three new faces. With all precincts reporting, Jamie Lawson (405), Loralee Stevens (324) and Rocky Himpel (245) were the top three vote-getters Tuesday.

A candidate forum for local races will be next week at VFW Hall. The forum, which will feature candidates running for Tonganoxie city council and school board candidates, will be 7 p.m. Wednesday, Oct. 18, at the hall. Local races for school board and city council will be decided next month. Polls will be open 7 a.m.-7 p.m. Nov. 7.

Tonganoxie City Council candidates will be available for a forum from 1-3 p.m. today at the VFW Post Home. Candidates are Chris R. Donnelly (incumbent), Andrew T. Gilner (incumbent), AW (Rocky) Himpel, Ryan Keltner, Jennifer Kohl, Jamie Lawson, Rachell I. Rowand, Loralee D. Stevens, Michael Towle and Jim Truesdell (incumbent). The candidates are vying for three seats. The Aug. 1 primary will shave that number down to six for the general election, which is in November. School board positions also will be decided in the general election.

A strong voter turnout in Leavenworth County helped knock out some incumbents, while others barely were victorious on a night when the country was split in its choice for its 45th president. Leavenworth County had 60 percent turnout, according to County Clerk Janet Klasinski, though she noted that is a percentage of the total active and inactive voters. Inactive voters are those residents who have moved.

The Tonganoxie USD 464 School Board will have a much different look in a few months. Voters last week voted in three challengers in races that involved incumbents, while a fourth seat was a battle between two candidates who were not incumbents.

Tonganoxie voters won’t cast ballots on electronic machines Tuesday. Leavenworth County Clerk Janet Klasinski has opted for paper ballots as a cost-saving measure. No machines means no fewer transportation costs. Klasinski said the decision also allowed her to reduce the her election worker staff by one. “In the past, we’ve had only 8 percent turnout,” Klasinski said. “I’m anticipating more than that this year.”