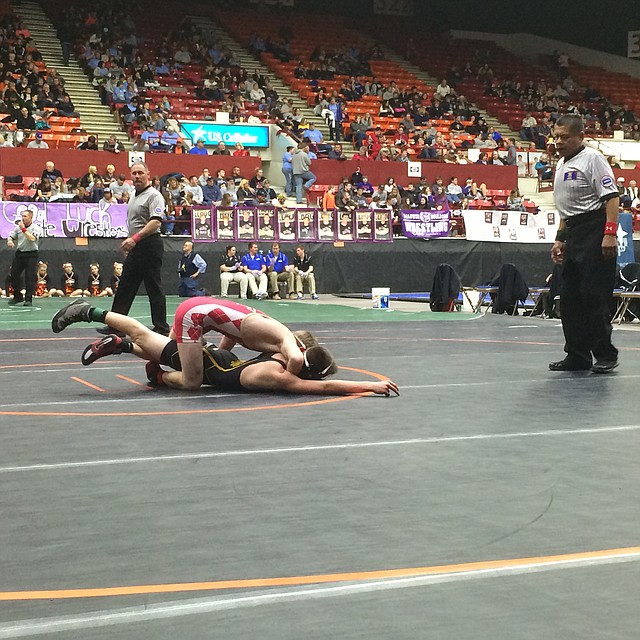 Tonganoxie High's Aiden McClellan competes in a consolation match Friday, Feb. 27, 2015, at the Class 4A state tournament. McClellan won the match in overtime.

It was another season of state medals for the Tonganoxie High wrestling team. THS landed three medals at Saturday’s Class 4A state tournament, equaling its school-record best set in 2013 and tied in 2014.

Tonganoxie High had arguably its best showing of the wrestling season Saturday at the Baldwin Invitational Tournament. The Chieftains finished fourth out of 16 teams, finishing behind a trio of ranked teams in Class 4A. Goodland, ranked No. 7 in 4A, won the meet with 216 points, while Santa Fe Trail, ranked No. 2, finished second with 172.5. No. 6 Baldwin took third with 159. THS wasn’t far behind at 146.5.

Tonganoxie High still has four wrestlers competing on Day 2 of the Class 4A state wrestling tournament in Salina. Gad Huseman, Dalton Tavis, Aiden McClellan and Patterson Starcher all are competing in the consolation bracket Saturday.