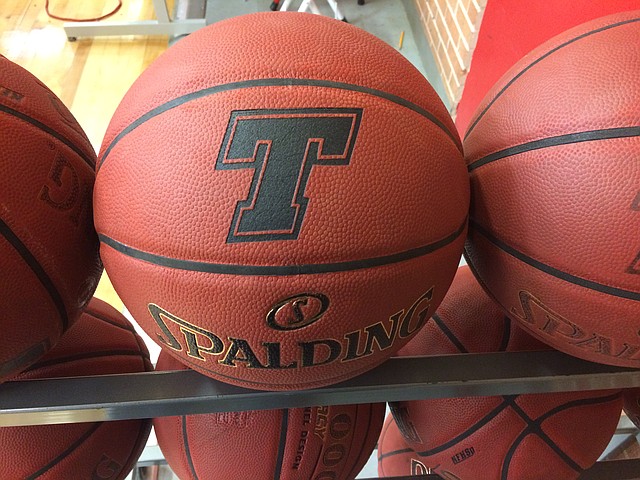 The Tonganoxie High boys team dropped three straight heading into this week, but the Chieftains still are in position to host at least one Class 4A substate game next month.

This week's weather has caused some changes for the 61st annual Tonganoxie Invitational.

The 61st annual Tonganoxie Invitational will continue Thursday and finsh up Friday. Teams with Tonganoxie on the boys side are Bonner Springs, De Soto, Eudora, Maranatha Christian Academy, Metro Academy, Olathe West and Wamego. Bishop Ward, Bonner Springs, De Soto, Eudora, Metro Academy, Sumner Academy and Wamego are on the bracket with THS on the girls side.

Tonganoxie High boys and basketball games scheduled for Friday against Spring Hill at home now will be played today. Times for all games will be the same, but games were moved up a day due to the threat of inclement weather expected to hit the area starting Friday evening.

The Tonganoxie High girls basketball team got behind early in a Frontier League contest earlier this month and couldn’t recover. THS fell Jan. 7 to Baldwin, 50-33, at home.

The Tonganoxie High boys basketball team opened the 2020 portion of its schedule with a dominating victory. THS defeated Baldwin, 62-27, Jan. 7 in Tonganoxie. Tonganoxie led, 10-6, after the first quarter, but a big second quarter set the tone. The Chieftains outscored the Bulldogs, 22-9, in that period. THS outscored Baldwin in every quarter on its way to the Frontier League victory.

Tonganoxie High had some free-throw struggles down the stretch last week against Perry-Lecompton, but the Chieftains hung on for the 39-37 victory against the Kaws. The victory moved THS to 2-0 overall and 1-0 in Frontier League play. THS had pushed its lead to 10 with about 4 minutes left in the game, but Tonganoxie missed the front-end of 1-and-1’s on team fouls 7, 8 and 9 in the fourth quarter. That helped allow PLHS to assemble a rally, but Tonganoxie eventually was able to hold on for the home victory.

There wasn’t much offense on display in Wednesday’s Tonganoxie-Eudora substate semifinal. The teams scored 2 points each in the second quarter and Tonganoxie High led just 13-7 at halftime. The team led much of the game and then came “the bounce.”

The Tonganoxie High girls basketball team will continue on in Class 4A substate action, while the McLouth High girls were eliminated in a 2A quarterfinal. Tonganoxie held on for a 38-32 victory against Coffeyville on Tuesday at Tonganoxie. THS improved to 5-16 on the season, while Coffeyville’s year ended at 1-17.

Dallas Bond had a breakout game Tuesday as the Tonganoxie High boys basketball team won its regular-season finale, 85-60, at Atchison. Bond scored 30 as THS cruised to the non-league victory. Hayden Robbins scored 23, while Rylee Beach also was in double figures with 10.

February has been good to Calvin Morgan. First, the Tonganoxie High senior was named this month's Midco Sports Network Scholar Athlete of the Month. The three-sport THS standout got some air time with Midco's feature segment on him. Cameras again were on Morgan on Thursday night.

The Tonganoxie High boys basketball team was clicking in its semifinal game this past week at the Tonganoxie Invitational Tournament. The defense was solid and the offense was opportunistic. There was an Elijah Tyner and-1 play in which the junior got fouled and then his highlight-reel quality shot somehow made its way through the hoop.

60th Tonganoxie Invitational schedule could change due to impending weather

The 60th annual Tonganoxie Invitational Tournament could have some schedule changes later in the week due to another round of anticipated inclement weather. Tonganoxie officials are trying to be proactive with the threat of potential winter weather Saturday. Championship and consolation semifinals are being moved up a day so that a decision can be made later this week whether to play final rounds on Friday or Saturday.

Drake Pray set the tone for Tonganoxie early in the Chieftains’ Frontier League game against Ottawa at THS. Pray picked off an Ottawa pass and took it the other way for a layup and the first points of the game. By the time the first quarter ended, Pray had seven of Tonganoxie’s points and the Chieftains were up, 15-13, entering the second quarter. After the hot start, though, Ottawa responded with a 22-6 advantage in the second quarter. Tonganoxie pecked away at the deficit, but Ottawa eventually escaped with a 55-49 victory in the first game of 2019 for both teams.

The past few days likely will be sticking in Drew Williams’ mind for decades to come. The Tonganoxie High girls coach was preparing for Friday’s home game against Ottawa, which also was the first game of the new year. While game planning Thursday and Friday, Williams also was substitute teacher planning — wife, Lauren, could have her baby any day.

Eudora kept both Tonganoxie High basketball teams winless in Frontier League play Thursday. The Cardinals won the girls game, 54-12, and then swept the varsity games with a 42-21 victory in the boys game. EHS spoiled Tonganoxie’s season openers with two routs. The Eudora girls improved to 4-1 overall and 1-0 in Frontier League play, while the EHS boys now are 3-2 and 1-1. The Tonganoxie girls fell to 1-3 and 0-2, while the THS boys now are 2-2 and 0-2.

Tonganoxie enters basketball play Thursday with both the boys and girls teams coming off victories. The girls improved to 1-2 overall and 0-2 in Frontier League play following a 40-8 victory Tuesday in Kansas City, Kan., against Turner.

The Tonganoxie High girls basketball team lost a close one Tuesday in Perry. THS looked to bounce back from a season-opening loss to Louisburg, but fell just short. Perry-Lecompton prevailed, 43-39, dropping THS to 0-2 overall and 0-1 in Frontier League play. The Chieftains will try to regroup this week as they prepare for their next game this coming Tuesday against Turner in Kansas City, Kan.

Tonganoxie had two players make the all-Kaw Valley League basketball teams this year. Morgan Brusven was honorable mention for the girls team and Mac Thompson honorable mention for the boys team. The girls finished the season 5-16, while the boys went 4-17. It was the final basketball season for the Kaw Valley League. Tonganoxie, Piper and Bonner Springs all will compete in the Frontier League, while several other KVL teams will join a new conference with Leavenworth and other area schools.

The Tonganoxie High boys basketball team had a shot at the upset Friday in a Class 4A Division I substate game against Piper. THS got out to a slow start, falling behind, 13-5, in the first quarter. But the Chieftains chipped away at the lead, closing the gap the next two quarters. The game headed into the final quarter with the Pirates clinging to a 35-32 lead.

Tonganoxie High basketball swept Atchison in regular-season finales on Friday The THS girls (6-14) defeated AHS, 41-28, while the boys (5-15) dropped Atchison, 65-45. Atchison also will be in the same Class 4A Division I substate as Tonganoxie later this week at Basehor-Linwood.

Tonganoxie High basketball games moved up due to impending weather

Tonganoxie High basketball games against Bonner Springs today will be moved up an hour due to another anticipated ice storm. The games, which are being played at Bonner Springs High School, will be moved up an hour. Junior varsity girls now play at 3 p.m. and junior varsity boys 3:15 p.m. Freshmen boys are to start at 4:30 p.m. and varsity girls at 4:45 p.m. Freshmen girls play at 6 p.m. and varsity boys at 6:15 p.m.

The Tonganoxie High boys basketball team got a resounding victory at its home tournament Thursday, while the THS girls bounced back from a rough first game Tuesday and nearly knocked off Wamego in the second round. Tbe THS boys shot nearly 53 percent from the field and cruised to a 63-36 victory against Holton in the consolation bracket.

The 59th annual Tonganoxie Invitational begins today with the boys bracket. Eudora plays Metro Academy at 4 p.m. and then De Soto and Holton take the court at 5:30 p.m. Tonganoxie faces Wamego in the final game of the day. Tipoff is set for 7 p.m.

Tonganoxie High basketball teams will go into the break looking to improve on identical 1-3 records. The boys team lost, 69-39, Friday to Piper in Kansas City, Kan., in its 2017 finale.

The Tonganoxie High boys basketball team hoped a third meeting with state-ranked Piper would provide the upset charm, but THS couldn’t pull off the victory. Piper prevailed, 67-50, ending Tonganoxie’s season in a Class 4A Division I substate tournament game at PHS in Kansas City, Kan.

Once his team got in early foul trouble, Tonganoxie coach Matt Frost decided to play a 2-3 zone and pack the paint to force Atchison — known for punishing teams in the paint — to shoot jump shots. But Atchison made 9-of-14 three-pointers, and that was too much for Tonganoxie to overcome in a 58-46 road loss on Friday night. “They haven’t done that all year,” Frost said. “If they’re going to beat us making nine threes there’s not a whole lot you can do about that.”

Facing a 13-point deficit just four minutes into the game and missing its starting point guard, Tonganoxie coach David Hillmon admitted it would have been easy for his team to fold. “If you look at our season overall, for guys to stay focused, locked in, and still be committed to the program and the process,” Hillmon said, “that means a whole lot to me as a first-year head coach. We have to continue to trust the process and develop a winning culture.”

With time winding down in the third quarter, junior Taylor Lee had to rush a three-point attempt to get it off before the buzzer. The shot was nothing but net, and Lee, who looked over to her bench in shock, was perhaps the only person in the gym surprised the shot went in.

THS boys roar back against Lansing, but Lions too much in second half

Just three minutes and 30 seconds into the game, it seemed like it was going to be a long night for the visiting Tonganoxie Chieftains. The Lansing Lions hit five of their first six three-pointers, and before the Chieftains could even blink, they found themselves in a 19-0 hole.

With about 4:30 remaining in the third quarter and the Tonganoxie High girls basketball team down 43-15, it didn’t seem like things could get much worse. But after the Lansing Lions threw up an air ball from beyond the arc, the shot deflected off Chieftain junior Mackenzie Price and went straight into the basket.`

The Tonganoxie High girls basketball team found itself in an enjoyable place last week: the win column. The THS girls defeated Heritage Christian, 57-34, Jan. 26 at the THS gymnasium. The squad followed up with a big victory Friday in Kansas City, Kan. Tonganoxie defeated Bishop Ward, 63-42, on the road and improved to 3-9 with the two-game winning streak.

Tonganoxie boys win another nail-biter, have won 3 of last 4

The Tonganoxie High boys won another nail-biter and then nabbed its first road victory last week. After starting 0-9, the team has won three of its last four games. THS defeated Heritage Christian, 32-30, Jan. 26 at home and then defeated Bishop Ward, 47-38, on Friday in Kansas City, Kan. The Chieftains were in a tight game all night against Heritage Christian. Tonganoxie had the largest lead at five points early (10-5). The game also saw four lead changes and six ties. Both teams also had similar runs, with THS’ longest being 11-3 and Heritage Christian’s 11-2.