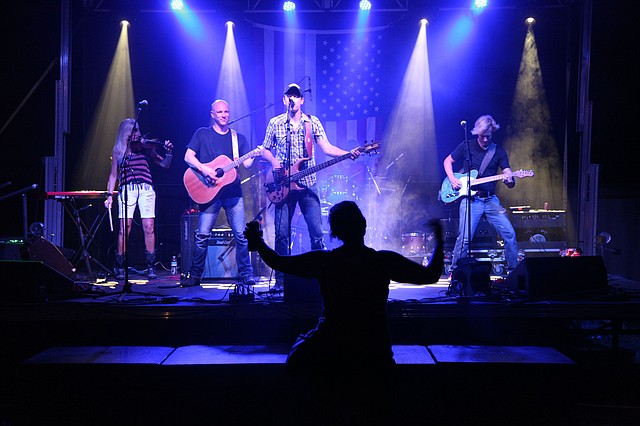 A spectator dances as the Big Time Grain Company performs a song Saturday night in Gallagher Park as part of the Tonganoxie Sesquicentennial celebration.

One of Tonganoxie’s bigger Saturdays is almost here. Tonganoxie Days will be Saturday, which means the Gallagher Park and the surrounding area will be bustling with music entertainment, children’s inflatables, food vendors and adult beverages.

Tonganoxie might not be celebrating a big birthday this year, but there is a milestone at this year’s Tonganoxie Days. The 30th annual Tonganoxie Public Library Run/Walk will start at 7:30 a.m. Saturday at the library, 303 S. Bury St. Proceeds from the run after expenses go toward the new library fund and summer reading programs. About 200 have signed up for the run so far.

A sign and a brick-laden gathering spot have helped Gallagher Park take shape, but more upgrades are planned for the Tonganoxie landmark. Kay Soetaert, part of the park’s citizen task force, said a kiosk and flagpole are in future plans, as are park benches. She said workers also will “level off some of the ground where it slopes and keep it open green space for events.”

The city will continue to be involved in an annual Tonganoxie festival. Council members said they favored the city’s involvement in whatever is decided moving forward. The city earmarked $31,500 for the Tonganoxie Sesquicentennial, which took place in June the traditional weekend of Tonganoxie Days.

Sesquicentennial gets high marks as community celebrates 150 years of Tonganoxie

A sesquicentennial lasts a year, but organizers packed a bevy of entertainment and activities into a two-day event Friday and Saturday. After several months of planning, the event came together and the community joined together to celebrate the town’s 150th anniversary milestone. Tonganoxie’s first plat was made official in 1866. Co-chair for the event and Council Member Curtis Oroke said feedback was positive during the festival, which covered three blocks along Fourth Street and two blocks along Main Street.