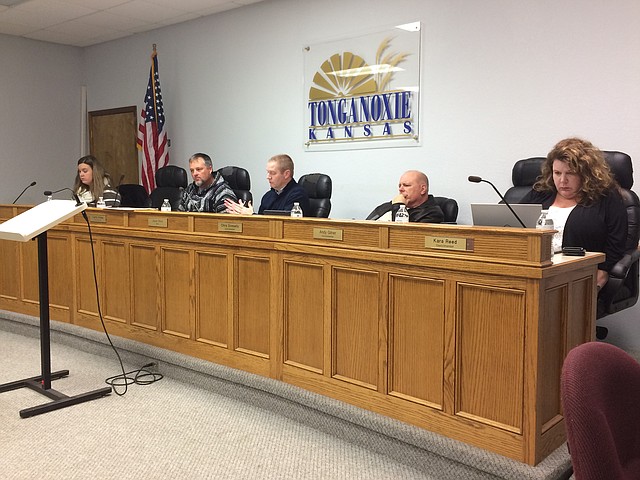 For the first time, coming this spring, The city of Tonganoxie will be introducing its pilot program for a Civic Academy Program. This program aims to better inform the public about the various departments, services and facilities that are offered by the city.

As the calendar turns to 2018, the landscape of local government also will be changing. For both Tonganoxie City Council and Tonganoxie USD 464 school board, three new faces each will be at meetings. On the city council, Rocky Himpel, Jamie Lawson and Loralee Stevens will be sworn in at a special 7 p.m. meeting Jan. 8 at council chambers.

General obligation sales tax bonds will be issued to fund a new Tonganoxie Public Library. The council voted, 5-0, to approve the bond issuance of $3.85 million. The council approved $3.75 million in funds for the library at the last meeting. City Manager George Brajkovic said the additional $100,000 was to cover issuers fees and other costs associated with issuing the bonds.

Tonganoxie Mayor Jason Ward will not involve himself with any future discussion about the proposed Tyson chicken-processing plant south of Tonganoxie. Questions were raised last week about a potential conflict of interest between Tyson and the mayor because the firm for which he works, Shook, Hardy & Bacon, lists the Arkansas-based company as one of its clients. Ward addressed his employment with the firm.

Tonganoxie’s mill levy will have a slight increase for 2018. The Tonganoxie City Council had its budget hearing Monday before adoption of the 2018 budget, which carries a mill rate of 45.144. That’s a slight jump from the 2017 rate of 44.84 and nearly a 1-mill increase from 2016’s rate of 44.179. No residents spoke during the public hearing. The council then voted to give final approval to make the budget official. The Tonganoxie school board will have a special meeting at 6 p.m. today in the Tonganoxie Elementary School library to give initial approval to its 2017-18 budget.

Incumbents will join seven challengers also vying for their seats in a Tonganoxie City Council election that will require a primary. The 10-person field will have a run-off Aug. 1 for the at-large seats.

Building activity up in Tonganoxie

There’s a lot of building activity these days in Tonganoxie. Assistant City Manager Jamie Shockley presented numbers at Monday’s City Council meeting. She noted that Tonganoxie leads the county in single-resident building permits being issued so far this year. Shockley said many numbers are encouraging so far this year, including 26 percent of budget estimates have been collected for sales tax. That’s up from 13 percent at this time in 2016. Shockley said she wanted to research why that number has doubled from last year.

Tonganoxie plans to continue with improvements at its undeveloped business park, but it will have a new partner in an intelocal agreement. The city had approved an interlocal agreement with the Leavenworth County Port Authority for development of the business park. The county also has pledged $5 million to the park.

The Tonganoxie City Council has denied a church from having a lot in the Urban Hess Business Center. The building, which is owned by Eric Finkbiner, once was a greenhouse and later a motorcycle shop. Finkbiner, who operated the pharmacy at the former B&J Country Mart, had plans for a business in the pharmaceutical company for his building in Urban Hess, but those plans fell through. Finkbiner said he hasn’t made much money off a previous tenant, so when the Kaw Valley Church of Christ wanted to come to an agreement on the building, he jumped at the chance.