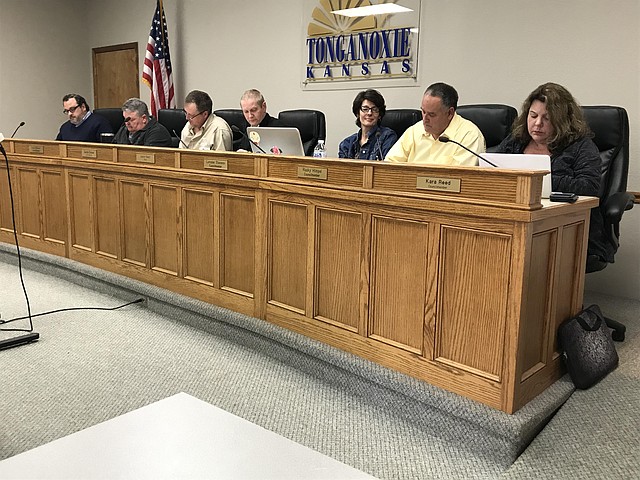 Tonganoxie City Council at a regular meeting in 2018.

Lisa Patterson is the latest appointment to the Tonganoxie City Council. Members appointed the Tonganoxie, 5-0, at Monday’s regular council meeting. The council chose Patterson, a senior communications manager with H&R Block, to the post. She will be sworn in at the Dec. 3 meeting. Patterson replaces Kara Reed, who is moving out of city limits.

With Kara Reed’s departure from the Tonganoxie City Council, her position is open for applications, which will be initially reviewed by the City Council at the Nov. 5 council meeting. Applications must be submitted by 10 a.m. Oct. 26.

With Mayor Jason Ward and council member Kara Reed both absent from Monday’s meeting, the council had to appoint one of its members to lead the meeting. Reed served as mayor pro tem, which means she assumed mayoral duties in the event of the mayor’s absence.

Plans for the rest of the land at the former Tonganoxie Elementary School campus were discussed in more detail at Monday’s City Council meeting. The Tonganoxie City Council took steps forward at the last meeting with regards to the new library’s future on the south end of the former TES site.

It appears outgoing council member Kara Reed, who served for five and half years on the Tonganoxie City Council, will not have a hand in selecting her successor. Reed announced at the Sept. 4 meeting that she would be resigning because she was moving outside the city limits. “It has been my great honor to serve alongside a dedicated staff and fellow elected officials on behalf of the city of Tonganoxie for the last five and a half years,” she wrote in a letter she read to citizens, city staff and fellow members of the governing body. “It is with regret that I must leave before my term has expired, but a move outside of city limits makes my resignation necessary.”

Tonganoxie is looking for animal control service proposals. Inquiries about the request for proposals are due by 2 p.m. Sept. 14 and will be posted on the city’s website. Inquiries should be directed to Dan Porter, assistant city manager; dporter@tonganoxie.org; 913-845-2620, ext. 1040. Proposals must be submitted by 2 p.m. Sept. 19. Full details on the scope of services and submission instructions are available in the 2018 Animal Control Services Request for Proposals.

The Tonganoxie City Council will meet at 7 p.m. Tuesday for its first meeting of the month. The governing body normally meets the first and third Monday of each month, but Monday’s meeting was moved to Tuesday because of the Labor Day holiday.

A new Casey’s General Store cleared a notable benchmark. The Tonganoxie City Council approved, 4-0, a final plat for a new project for the convenience store chain. The store is to be built in the area generally between Fifth and Sixth streets on the west side of U.S. Highway 24-40.

Per Larry Meadows’ wishes, his wife, Lois Meadows, spoke before the City Council during open session about two projects Larry hoped could be done in the coming years. Larry Meadows, an involved community member for several years, died last month at the age of 76. In his final days, he worked with others in the community and his wife to pitch a couple ideas to the council.

City officials are holding the line for the 2019 budget. The Tonganoxie City Council voted to approve the budget, which carries an estimated mill levy rate of 45.295. That is down slightly from 2017, when the city an actual tax rate of 45.326 mills. The 2017 rate was 44.84. The approval came after a 90-minute budget work session before the regular meeting Monday night in council chambers. No residents voiced opinion during the budget hearing, which is required for Kansas municipalities to do before giving final approval to a budget.