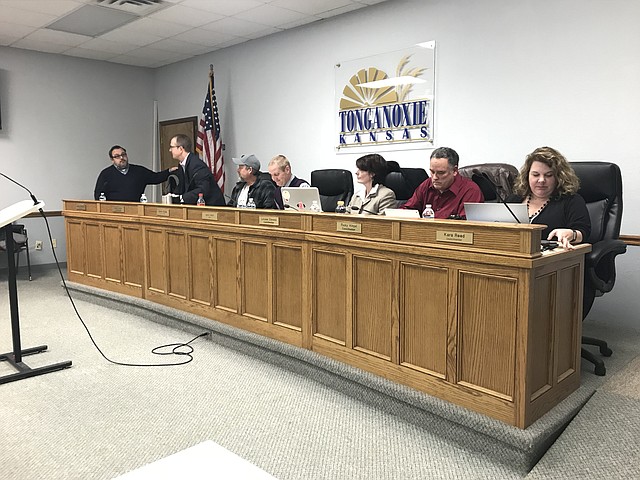 Tonganoxie City Council at its first meeting with a new council Jan. 8, 2018.

The Tonganoxie City Council approved alcoholic beverage license for Tonganoxie Days and for the Tonganoxie Public Library for its monthly art nights. As was the case for the Sesquicentennial celebration in 2016 and last year’s Tonganoxie Days, the city will have a beer tent just north of the water park. Folks attending again, like last year, will be able to roam the grounds with their beverages. The grounds again will run from Fourth and Main to Second and Main and will include Gallagher Park and Third Street from Main to Delaware. That measure passed, 5-0, while the library issue passed, 4-1.

Dave Bennett is the newest member of the Tonganoxie City Council. The council voted, 3-2, to appoint Bennett to Jamie Lawson’s unexpired term. Curtis Oroke, Rocky Himpel and Loralee Stevens all voted in favor of Bennett, while fellow Council Member Kara Reed and Mayor Jason Ward voted against. Because of the type of vote it was for an appointment, Ward had the option to vote. Normally the mayor does not vote unless a tiebreaker is necessary or a super majority is required.

The council, by a 4-0 vote, approved a first amendment to the city’s contract with Unilock for its property at the Tonganoxie Business Park. City Manager George Brajkovic said the amendment comes with Unilock’s plans for some building reconfiguration on the site. The change pushes back a final approval, which now is May 14.

Tonganoxie is accepting applications for the vacant City Council seat. City Manager Geroge Brajkovic outlined the timeline for considering an appointee to take Jaime Lawson’s position on the council. Lawson announced his resignation from the council a few weeks ago, citing personal reasons for his decision.

The Tonganoxie City Council approved the sale of bonds that will fund the new library project. Members voted, 3-0, to approve the sale to Commerce Bank. The sale of $3.85 million in bonds will mostly go to the library project, with roughly a $100,000 earmarked to cover issuance and underwriter costs. The bond issuance is for 20 years. The bonds went up for sale at 9 a.m. Monday.

The council approved, 4-0, a special-use permit for an in-home gun dealer and gunsmithing business. The permit was approved for Justin Barker at his residence, 2604 E. Sycamore St., which of course is zoned as residential. Barker told the council the permit allows him to make money through his business until he can move his business into a shop. He said his services will be provide by appointment only and on weekends and that it will be more a matter of buying or selling a single gun at a time with a customer.

The Tonganoxie City Council directed City Manager George Brajkovic to offer the county a maximum of $8,730 as a financial partner for a U.S. Highway 24-40 corridor land-use study. The county developed a scope of services for the study after putting out request for qualifications. Video proposed a fee of $58,203.

More property west of U.S. Highway 24-40 will become part of the city. Council members approved, 4-0, with Curtis Oroke absent, voluntary annexation of 1.3 acres, which is owned by the Evans Family Trust. The acreage is an area south of Kansas Highway 16 and west of U.S. 24-40 and is planned for commercial development.

Council Member Rocky Himpel wanted staff to research options for technology with regards to recording council meetings during the last council meeting. City Manager George Brajkovic said staff consulted various area municipalities and found that some recorded, while others didn’t. For one city, the recording came with a cost of $20,000 annually and additional staff time. The city will continue to record the meetings on Facebook Live. Staff also will consult IT officials on possible archiving of the meetings through YouTube or on the city website. Assistant City Manager Dan Porter said the Jan. 8 meeting garnered 2,040 views on Facebook.