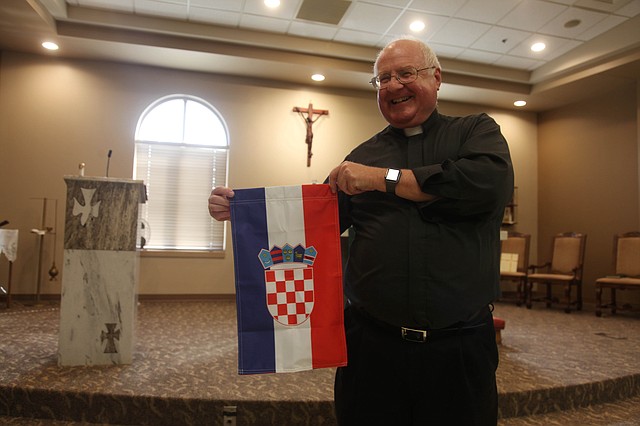 The Rev. Mark Goldasich holds a small version of the Croatian flag Friday at Sacred Heart Catholic Church in Tonganoxie. The longtime Tonganoxie priest, who grew up in the Strawberry Hill district of Kansas City, Kan., is of Croatian descent. Goldasich has caught World Cup fever in rooting for the homeland, as have many in Strawberry Hill.

The Rev. Mark Goldasich had a mighty schedule conflict Sunday. While many of his friends and relatives of Croatian decent in the Strawberry Hill district of Kansas City, Kan., had surely attended Mass on Saturday night and thus were able to watch the big World Cup match Sunday morning, Goldasich had a job requirement.

Divine cheers for Croatia from Tonganoxie

The Rev. Mark Goldasich said he might need an iPad at the altar for his Mass at 10:30 a.m. Sunday at Sacred Heart Catholic Church in Tonganoxie. After all, Croatia — the Goldasich family’s homeland — plays at 10 a.m. Sunday for the World Cup soccer championship.