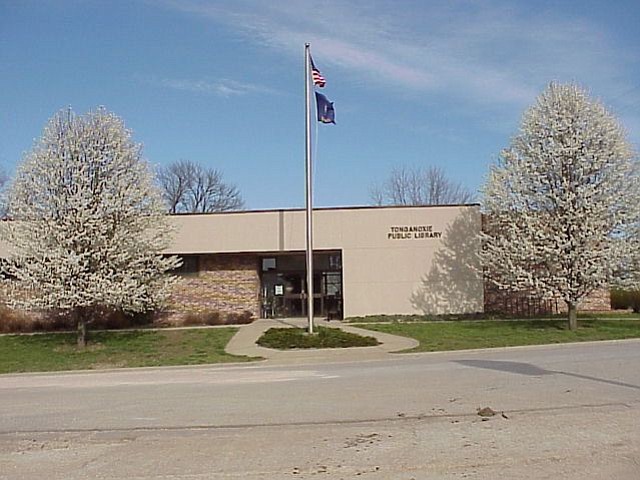 Tonganoxie Public Library will open the doors to its much-anticipated new space soon, but visitors will have to be without the library’s services for just more than a week as staff makes the transition to the new space The new library opens March 9 at Fourth and Shawnee streets, but the current library at Third and Bury streets closes its doors for good later this week. The current library will close for good at 8 p.m. Thursday at Third and Bury streets and reopen March 9 with expanded hours at the new site.

The Tonganoxie Public Library is back to its regular hours, though as of late Tuesday morning the library still did not have running water or working bathrooms. Library director Nicole Holifield posted a note last week on the library’s website with an update that the library would be back in operation starting at 9 a.m. this past Thursday. Officials had to push that date back, so instead the library re-opened Tuesday.

The Tonganoxie Public Library will be re-open this week. Library director Nicole Holifield originally posted a note on the library’s website with an update that the library would be back in operation starting at 9 a.m. Wednesday, Oct. 9, but that date had to be pushed back. The library now will reopen Tuesday.

Progress continues on the new Tonganoxie Public Library, but the current library has been closed due to a plumbing issue the last few days. The library initially closed at 2 p.m. Friday due to a plumbing issue. The library remained closed through the weekend as repair work continued. Library director Nicole Holifield posted on the library’s Facebook page Monday with an update. She said that water had backed up into the men’s restroom, hallway and a storage closet.

Next Chats with Chelsi is Thursday at the library

Chelsi Myer will be on hand for a 4 p.m. Chats with Chelsi presentation Thursday at the Tonganoxie Public Library. Myer is a Leavenworth County Agent with Kansas State University Research and Extension. The topics of Myer’s chats vary from month to month, but they all stem from her family and consumer science background.

Children will get to see a variety of animals and ask questions about them next week at the Tonganoxie Public Library. Local 4-H members will present a variety of animals starting at 10:30 a.m. Tuesday. There will be a horse, sheep, goat, rabbits, calf and chickens at the petting zoo.

Art Night Out again next month at Tonganoxie Public Library

Art Night Out is coming Feb. 7 to Tonganoxie Public Library. The February art project will be bottlecap resin art 6-8 p.m. Feb. 7 at the library’s community room. Cost is $20, with Myers Hotel providing drinks.

Community members can provide input about the new Tonganoxie Public Library in the coming weeks at various locations in Tonganoxie. Boards showing potential designs for the library have been on display since Monday at the Leavenworth County Annex. Residents can share opinions with post-it notes on the boards, which Sapp Design Architects created.

Tonganoxie Public Library officials will have a community forum at 7 p.m. today to discuss plans for the new building, to be built at Fourth and Shawnee streets on the southern end of the former Tonganoxie Elementary School campus. Michelle Burdick Kaiser with Benson Method and SAPP Design architects and Curtis Golba with JE Dunn will be at the forum to also answer questions at the event, which will go until 8:30 p.m. at the Tonganoxie VFW 9271 Post Home. Building officials will be seeking feedback from the community to help in developing the new library. All library users are welcome to attend the event.

Tonganoxie is one step closer to having a new library. The City Council approved Monday a resolution of the first amendment to the contract between Tongie 5, LLC and the city on 2 acres of land where the elementary school campus once was. The sale and price is expected to be final with a closing next month. Plans call for the library to be built on the south end of the property. The remaining 2.5 acres is expected to be developed, but there are no specific plans as of yet.