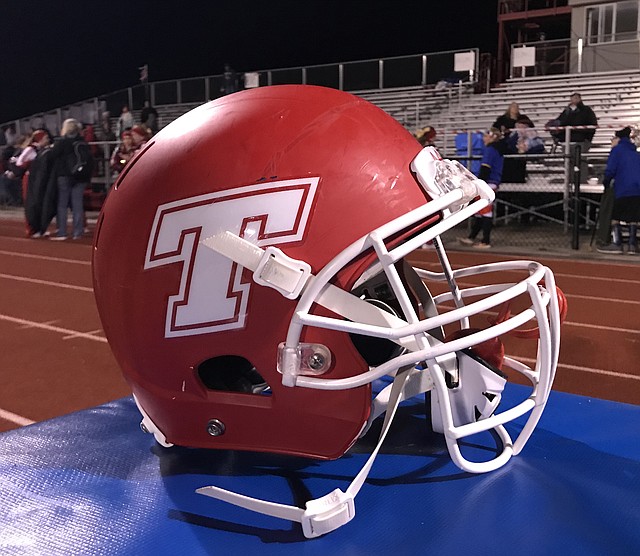 The Tonganoxie-Spring Hill game had the makings of a wild night in the first quarter Friday in a Class 4A regional game. The teams combined for 35 points, with THS holding a 21-14 lead heading into the second quarter. Defenses settled in during the second quarter and THS had a 24-14 lead heading into the half. THS took advantage of some opportunities in the second half and eventually secured a 45-24 victory. The Chieftains also made history in the process. THS improved to 10-0 on the season, marking the first time the Chieftains registered double-digit victories in a fall.

Tonganoxie High will face Spring Hill in a Class 4A football regional matchup next week at Beatty Field. THS moved to 9-0 with a 49-0 victory against Baldwin (0-9) on Friday. The Chieftains will have a rematch with the Broncos, who defeated the Pittsburg Purple Dragons, 17-13, Friday in Pittsburg. Pittsburg, the No. 8 seed in the 4A playoffs, finished its season at 4-5. No. 9 Spring Hill improved to 5-4. Tonganoxie defeated Spring Hill, 41-0, in Week 6. In its last four games, THS has only given up one touchdown, and that was last week against Ottawa. THS has outscored opponents, 207-7, during that time.

If Tonganoxie High makes a big playoff run this season, THS fans won’t have far to go to watch their Chieftains. Though some seeds aren’t set in stone with one more Friday of regular season left, it appears that Tonganoxie will be one of the top two seeds, which means home-field advantage for much of the playoffs.

It was a chilly Friday night, but Tonganoxie High football capped off a happy homecoming week with a 41-0 shutout victory against Spring Hill. The game remained scoreless much of the first quarter, but THS scored on back-to-back offensive possessions in the last three minutes of the opening quarter and suddenly had a 14-0 advantage. Quarterback Blake Poje connected with wide receiver Elijah Tyner on a short slant play that Tyner then took 76 yards for the score.

Tonganoxie High just keeps moving forward. The Chieftains continue to work toward a high seed in the Class 4A East Bracket and the prospects of a Frontier League title.

Bonner Springs went with a different look in the second half against Tonganoxie in a weather-delayed football game Friday at David Jaynes Stadium. It didn’t seem to have too much of an impact on the game, though, as THS won, 40-21, in a game called early in the fourth quarter due to inclement weather.

Due to anticipated inclement weather later this evening, the Tonganoxie-Bonner Springs football game has been moved up to 5 p.m. today at David Jaynes Field in Bonner Springs.

Tonganoxie High entered 2018 in some unchartered territory. The squad was coming off an undefeated regular season, the program’s first in 55 years. Trying to emulate that would be no easy task. THS opened the season 0-2 against two salty opponents in Basehor-Linwood and Louisburg.

Kansas Pregame recently published its 2019 football guide and a THS senior graces the front page. Lineman Cole Sample is one of 18 seniors included in the publication’s “Big Men on Campus” feature, highlighting them as the top players in the Class of 2020. Sample has received a track offer from Kansas and football and track offers from Pittsburg State.

Tonganoxie High’s Cole Sample has been named a finalist for the Bell Award, part of the Thomas A. Simone Awards. The awards are given to various football players in the Kansas City metro area. Sample played on the offensive and defensive lines for THS this year. and helped guide the Chieftains to a 7-3 record that included a seven-game winning streak.2ff

Tonganoxie, Paola to meet in football for first time in 35 years

Once upon a local high school league, Tonganoxie and Paola were conference foes and played often. Both THS and Paola were members of the Pioneer League for 13 years, but the last time the teams played was in 1982. The two teams now are in the same conference again with Tonganoxie joining the Frontier League this year, but Paola was the only league Tonganoxie did not face during the regular season.

Tonganoxie will try to win its seventh straight game tonight, but more importantly, advance to the next round of the playoffs. THS (6-2) is host to Chanute (4-4) at 7 p.m. Friday at Beatty Field in the first round of the Class 4A playoffs. This marks the first victory between the two schools. The winner of this game will take on the winner of Paola-Baldwin next Friday.

The Tonganoxie High defense managed its first shutout of the season Friday in a 20-0 victory against Baldwin at Beatty Field. The Chieftains held the visiting Bulldogs to two first downs and just 35 plays compared to Tonganoxie’s 18 first downs and 68 plays.

Baldwin, Tonganoxie football to clash for only the 16th time in program history

Tonganoxie and Baldwin are fairly close geographically, but the two schools from neighboring counties have met just 15 times since 1941. Tonganoxie leads the series, 9-6. Baldwin won the first meeting, 20-0, in 1941, according to THS alum and local football historian Jeff Hughes.