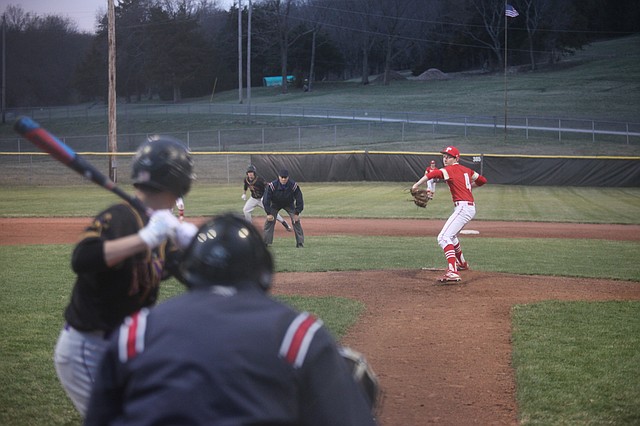 Tonganoxie High's Jayden Wilson winds up for a pitch during a 2019 home game against Spring Hill at the Leavenworth County Fairgrounds.

Tonganoxie High baseball had a final game on the schedule with Senior Night on Tuesday against archrival Basehor-Linwood. But the game got postponed until Wednesday due to weather and then canceled again that day due to weather conditions.

Tonganoxie High couldn’t get its offense going in the quarterfinals of this year’s Butch Foster Memorial Baseball Tournament. Paola shut out THS, 8-0, Thursday in the first round at CommunityAmerica Ballpark in Kansas City, Kan. Paola got out to a 1-0 lead in the bottom of the first and extended the lead to 3-0 in the bottom of the second. Another pair of runs in the fourth and three in the sixth gave the Panthers the victory.

Tonganoxie High bounced back Thursday with an 8-3 Frontier League road victory at Louisburg. THS got off to a good start, scoring four runs in the top of the first. Lousiburg answered with a run of its own, but the Chieftains responded again with two runs in the third and never looked back. THS scored two more in the sixth and then gave up single runs in the sixth and seventh innings before holding on for the victory.