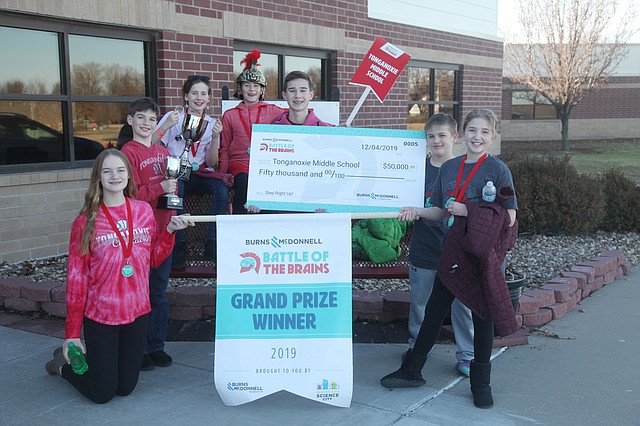 Tonganoxie Middle School students show off their swag after winning this year's Burns & McDonnell Battle of the Brains on Wednesday at Union Station. TMS' "Step Right Up" proposal won a $50,000 grant for the school's science, technology, engineering and math department. The students also will work with engineers to create a $1 million version of their exhibit at Science City.

This year’s Burns & McDonnell Battle of the Brains ceremony was winding down Wednesday, Dec. 4, at Union Station. Presenters had introduced all 20 finalists from among more than 250 Kansas City metro area middle and high school teams. The fanfare was building up to the winning team as Tonganoxie Middle School students in the school’s talented and gifted class looked on. First was fifth place and a $10,000 prize. Then came the fourth-place announcement and the $15,000 prize, third place and its $20,000 prize and then second place and with it a $25,000 prize. Out of 840 proposals involving 7,250 students from 270 schools in 50 school districts, TMS’ seven-student team had done pretty well, it thought. No matter what, the 15 teams that didn’t place would receive $5,000 for their science, technology, engineering and math (STEM) departments.