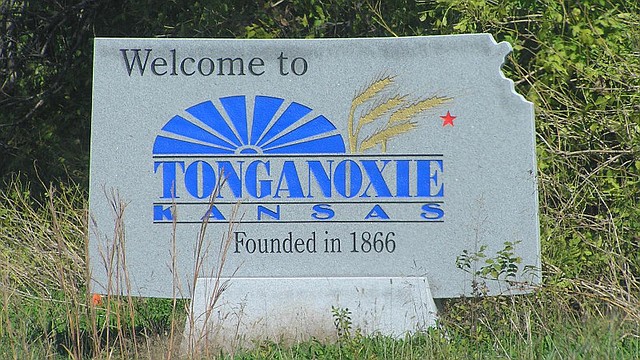 Courtesy of city of Tonganoxie

Tonganoxie has eclipsed a population of 5,500, according to estimates recently released. The next official county will come with the 2020 U.S. Census.

A Dollar General Market is expected to come to Tonganoxie after the Tonganoxie City Council finalized the purchase of land along U.S. Highway 24-40 at its Monday meeting. Council members approved the sale of 2.4 acres near the U.S. 24-40 curve for $220,000 to Colby 2021 LLC. The company plans to build a 12,460 square-foot Dollar General Market on the tract of land.

Festivals coming next month to Tonganoxie

Before the COVID-19 pandemic, Tonganoxie Days took place on the second Saturday in June. Now the event will be in September, as this year’s festivities will be Sept. 17 and 18 in downtown Tonganoxie. The event also will have a sunflower feel in honor of the Sunflower Stroll, which had been another Tonganoxie festival in September in recent years.

A Tonganoxie man died Tuesday from injuries sustained in a motorcycle-dump truck wreck on U.S. Highway 24-40 in Tonganoxie. The accident happened about 9:30 a.m. Tuesday near U.S. Highway 24-40 and Stone Creek Drive. According to Kansas Highway Patrol reports, Brad Mosbrucker, 45, Topeka, was driving an International dump truck east on U.S. 24-40 when he exited a controlled construction site and made a U-turn in the Stone Creek Drive intersection against a red light.

It appears that swimming will return to Tonganoxie Water Park this summer. Council members voted to move forward with the summer season, which would run from Memorial Day Weekend to Labor Day Weekend, or May 29-Sept. 6. After school starts for students in the Tonganoxie school district, the pool will limited to weekend hours.

The council approved the purchase of a lift station mobile generator from CK Power for $59,927 and preparations for connection of the generators to the lift stations from Capital Electric Construction for $11,990. Both were low bids.

Tonganoxie joins Lansing and Leavenworth, as well as many counties in establishing a mask covering ordinance in public places. The Tonganoxie City Council approved the measure, 3-2, during a special meeting Thursday conducted virtually.

The Tonganoxie City Council again will discuss the possibility of enacting a mask ordinance in public places. Council members will meet at 4 p.m. Thursday for a special virtual meeting to discuss drafting of mask ordinance. Council Member Jake Dale asked to revisit the topic during Monday’s regular meeting. Initial efforts to implement an ordinance sputtered in August. City staff crafted an ordinance, but it didn’t have enough support to move from discussion to a vote.

Tonganoxie residents interested in being considered to fill a City Council seat have until early December to apply. City staff will be taking applications until 10 a.m. Dec. 3. The Council then will review the applications at its regular meeting at 7 p.m. Dec. 7.

Council selects Thomas Turf for mowing contract at business park The council approved a contract with Thomas Turf and Landscape for mowing services of city-owned lots at the Tonganoxie Business Park for 2020.

Tonganoxie business will be receiving a total of more than $387,000 through the CARES Act spending plan. The Tonganoxie City Council approved the funding during its regular meeting Oct. 5. Applications were submitted from Sept. 1-9 and then on Sept. 17, the Allocation Review Committee, comprised of City Council members Lisa Patterson and Jake Dale and Tonganoxie Business Association President Monica Gee reviewed and made recommendations for the funding. The council established the spending plan through an ordinance July 20 and the Leavenworth County Commission then approved it Aug. 12.

A deadline for county representative applicants to the Tonganoxie Planning Commission has been extended. The deadline originally was Monday, but there were no applicants.

Discussion about a mask mandate ordinance highlights tonight's Tonganoxie City Council meeting. The meeting starts at 7 p.m. and again will be a virtual meeting, as has been the case for the governing body during the COVID-19 pandemic. Members of the public may attend the meeting virtually via the Zoom dial-in information posted below. The The city is not livestreaming the meetings on Facebook Live during the pandemic.

Local residents interested in being part of the Tonganoxie Planning Commission still have a few days to apply for a position on the board There are two positions that require residence within city limits and another outside city limits within 3 miles.

Together Tonganoxie Thrives is a page that highlights local businesses that are participating in a 13-week special advertising page that features those businesses different weeks.

New deadline for pet licenses and UTV registrations is next week

The Tonganoxie City Council had its first work session as it works to finalize the 2021 budget. Council members met virtually Monday through a Zoom meeting. The two-hour session came before the regular meeting.

Tonganoxie ranks No. 2, Basehor No. 3 for safe cities

Tonganoxie ranks No. 2 and Basehor No. 3 in HomeSnacks’ Top 10 Safest Cities in Kansas list. HomeSnacks, a website that has compiled best and worst lists for cities, counties and state for the last five years, “combines recent data from the Census, FBI, OpenStreetMaps and dozens of other sources into bite-sized studies to help you understand what it’s like to live in different communities across the country,” according to its website.

As the COVID-19 pandemic moves along, small businesses across the country continue to do what they can to weather the economic downturn. A new drive established locally, it’s hoped, will give some Tonganoxie businesses some relief from that storm.

The COVID-19 pandemic has forced two Tonganoxie restaurants to temporarily close, while others are offering carryout and some delivery options. Its grocery store also has designated certain shopping hours be reserved for people most susceptible to the virus. Brothers Market has announced that, effective Thursday, it will be open to senior citizens 65 and older, residents with increased susceptibility to serious illness and expectant mothers from 7-9 a.m. Mondays through Saturdays. It then will be open to the general public 9 a.m.-8 p.m. on those days.

There is some encouraging news for Kansas tourism, but the state’s new director of tourism also hopes that the industry can become more of a priority in Topeka. Bridgette Jobe served as keynote speaker Feb. 18 at Deer Ridge Estate for this year’s Tonganoxie Business Association Appreciation Banquet.

A vacant Tonganoxie City Council member position has attracted eight applicants. The interested residents all submitted their applications by Friday’s deadline at City Hall. The position became vacant with Dave Bennett’s announced resignation Nov. 18. The City Council likely will review applications at and make a decision at the Jan. 6 meeting, which also will be the first meeting for the new council.

The potential re-zoning of property near County Rd. 1, south of Tonganoxie, was discussed at the last Planning & Zoning meeting. None of residents who spoke were in favor of re-zoning. However, the committee unanimously voted in favor of re-zoning. It begs the question: Why even bother attending and speaking if no one listens?

The Tonganoxie City Council a budget that holds the line compared to last year’s mill rate. Council members approved, 4-0, the mill rate of 45.284 for 2020, with Lisa Patterson absent.

Every incorporated city in Leavenworth County has seen an increase in population since the 2010 U.S. Census, according to population estimates released earlier this month. The estimates are from July 2018.