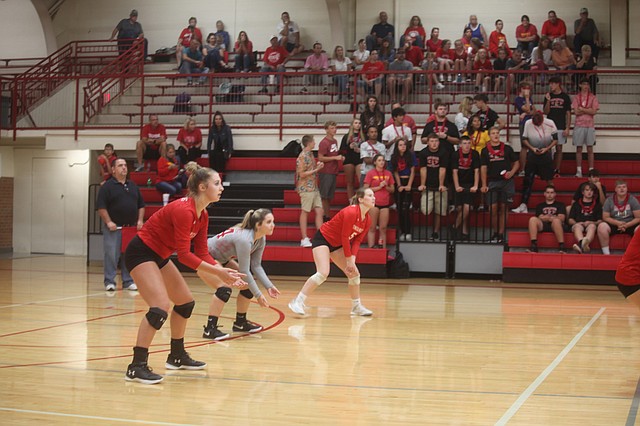 Tonganoxie High volleyball players react to scoring a point Saturday against Ottawa at the Tonganoxie Invitational. THS finished in sixth place at its home tournament.

Tonganoxie High volleyball will enter substate with a 13-21 record. Eudora defeated Tonganoxie, 25-23, 25-21, 25-16, on Tuesday at EHS. The Cardinals also swept THS in the De Soto Spikefest tournament earlier this month. Tonganoxie now waits for Class 4A substate brackets to be finalized. THS currently looks to be the No. 12 seed in the East Bracket and would play No. 5 Labette County (20-14) in the substate semifinals if the current seedings hold up. The tournament possibly would be Saturday in Topeka, as Hayden is the No. 4 seed at 23-14. Hayden would play No. 13 Fort Scott (12-22) if those seeds also remain the same.

Tonganoxie High volleyball placed sixth at its home meet before picking up two more victories Monday in Baldwin. THS went 2-3 at the Tonganoxie Invitational, going 2-2 in pool play before falling to Ottawa in the fifth-place match.