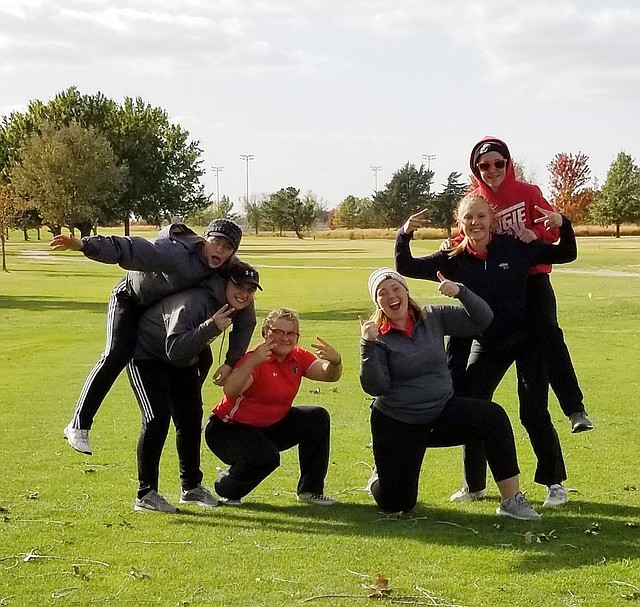 Tonganoxie High girls golf gathers during Day 1 of the 2019 Class 4A State Championships. THS finished fifth after the first day of competition, advancing them to Day 2.

Tonganoxie High finished right in the middle of this year’s Class 4A State Girls Golf Championships. THS shot a 412 on Day 2 as a team Tuesday after shooting a 409 on Monday at the 18-hole course in Hesston. The performance gave the Chieftains a sixth-place finish. Tonganoxie advanced to the finals Tuesday with a fifth-place finish at the end of the day Monday. in the first year of a 36-hole, two-day tournament at the state level, The top six teams and a handful of individual golfers advance to the second day in the new format. Hayden, which was sixth Monday, swapped spots with Tonganoxie on Tuesday. The Wildcats shot a 411 the first day and 391 the second for an 802 total. THS shot a 409 the first day and finished with a score of 821.

The Tonganoxie High girls golf team has advanced to Day 2 of the Class 4A State Championships at the Hesston Golf Course. THS stands in fifth place after Day 1 in the program’s first state appearance. It’s also the first year that the tournament is a two-day event. Previously, the meet has been a one-day, 18-hole competition, but it was increased to a two-day, 36-hole event.