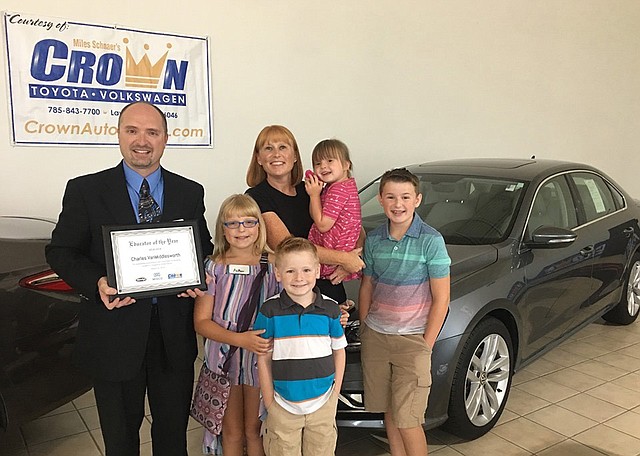 Tonganoxie High School music director Charles Van Middlesworth celebrates his teaching award at Crown Automotive in Lawrence. Crown, Minsky's Pizza and Midco Sports Network recently announced that Van Middlesworth won their 2018-19 Educator of the Year award. Pictured with Van Middlesworth is his wife, Kristan, and children Aiden, 13, Piatyn, 10, Declan, 7, and Daigen, 4. As part of his award, Van Middlesworth received $1,000 for himself and another $1,000 for THS. He also gets to drive a 2018 Volkswagen Passat for a year.

Tonganoxie High band director Charles Van Middlesworth gets to ride in style for a year — and has a little more cash in his pocket to boot. Van Middlesworth, known as “Mr. Van” throughout Tonganoxie, was named Midco Sports Network’s 2018-19 Educator of the Year.