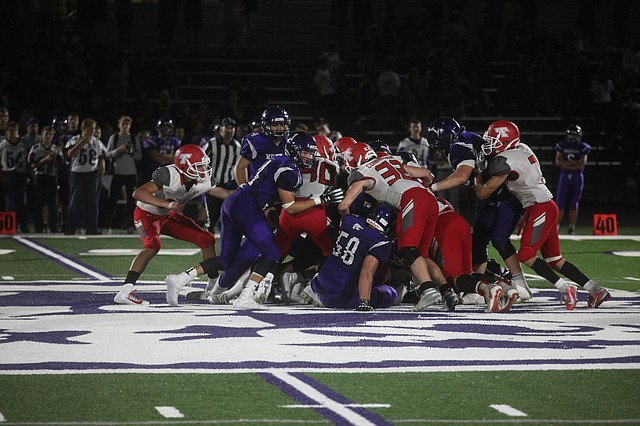 Tonganoxie and Louisburg battle at the line of scrimmage during a play Friday at Wildcat Stadium in Louisburg. Tonganoxie won, 42-6, against the defending Frontier League champions.

Tonganoxie High football teams thrive on new turf, it appears. After winning the first football game on its own turf last week against archival Basehor-Linwood, the Chieftains followed up by spoiling Louisburg’s first game on the new carpet Friday. Tonganoxie jumped out to a 14-6 lead and never looked back on its way to a 42-6 Frontier League victory at newly refurbished Wildcat Stadium, which also boasts upgrades to its press box and home seating. Tonganoxie, by the way, also defeated Spring Hill, 23-14, in 2017 in the Broncos’ first game on their new field.