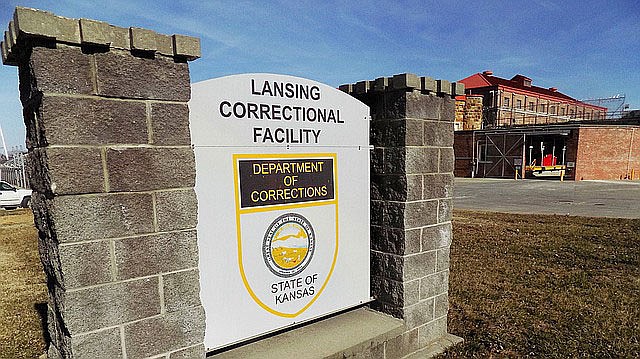 The exterior of the Lansing Correctional Center is seen Thursday, Feb. 2, 2017, in Lansing, Kan.

A Lansing Correctional Facility resident who died Monday had tested positive for COVID-19. It marked the prison’s third death related to COVID-19.

Leavenworth County outlined how it potentially planned to move forward earlier this week, and the Leavenworth County Commission met for a special meeting to discuss the COVID-19 pandemic Thursday morning, but the commission now will meet again Friday afternoon.

Nearly 90 cases of virus had reported at Lansing prison

The coronavirus has arrived at a third correctional facility in Kansas, taking total infections among inmates and corrections staff statewide to 89, state officials said Tuesday. The Kansas Department of Corrections said a worker tested positive Monday for COVID-19 at the Topeka Correctional Facility, the state’s only all-female prison.

Several inmates from one cell house at the Lansing Correctional Facility rampaged through offices, destroying windows and setting small fires for several hours Thursday, prison officials said. The disturbance began about 3 p.m. in medium-security cell house C, said Randy Bowman, spokesman for the Kansas Department of Corrections. By 9 p.m., some inmates had given up or gone back to their cells but others continued the rampage.

Operational changes have been implemented at Lansing Correctional Center — the largest prison in Kansas — after an inmate and a fourth staff member tested positive for the coronavirus, state prison officials said. The staff member is a male over the age of 20 and the inmate is a male over 50, but the Kansas Department of Corrections released no other information about them in its announcement late Saturday. Prison officials announced on March 31 that three staff members had tested positive for COVID-19.