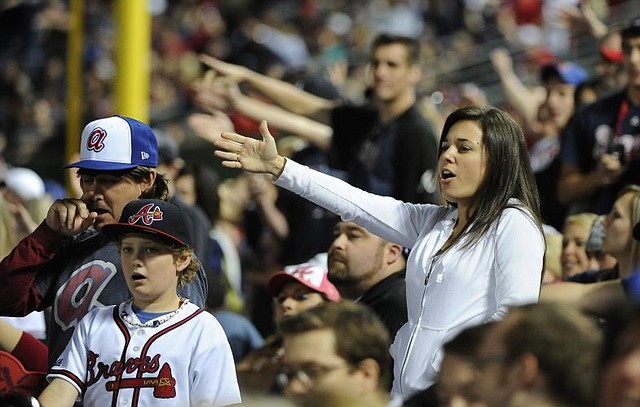 In this May 2, 2014, file photo, Atlanta Braves fans do the tomahawk chop during the ninth inning of a baseball game with the San Francisco Giants, in Atlanta. The Atlanta Braves say they have no plans to follow the lead of the NFL's Washington Redskins and change their team name. The team said in a letter to season ticket holders they are examining the fan experience, including the tomahawk chop chant, and have formed a "cultural working relationship" with the Eastern Band of the Cherokees in North Carolina. (AP Photo/David Tulis, File)

CLEVELAND (AP) — The spotlight for change is shining on the Cleveland Indians. Now that the NFL’s Washington Redskins have retired their contentious nickname and logo after decades of objection and amid a nationwide movement calling for racial justice, the Indians appear to be the next major sports franchise that might assume a new identity.